Wife Barbara went back to work on Saturday after breaking her ankle in August.

At the end of the day her ankle was sore but she went off to work again yesterday. She has today and tomorrow off but starts her regular schedule of six days on, eight days off again on Wednesday.

It was tough leaving her behind in Idaho yesterday. It was really nice living together full time again but we have our duty to support all those other people who need the time to camp out in the parks and protest people having more money than them so it’s back to work for us.

In somewhat related news Ry drove his van to Idaho this weekend to deliver stuff for Boomershoot I had purchased in the Seattle area. Life is always an adventure when riding with Ry and this weekend was no different. This was the drive across the field to the new explosives production site:

The first voice you hear is mine. The laughter is Barron, who gave Ry QOTD status for that little adventure. The last voice is son-in-law Caleb.

I rode back to the Seattle area with Ry yesterday. We had the left front tire blow out on the van while on I-90. It was a very interesting hole in the tire. We had never seen anything like this before: 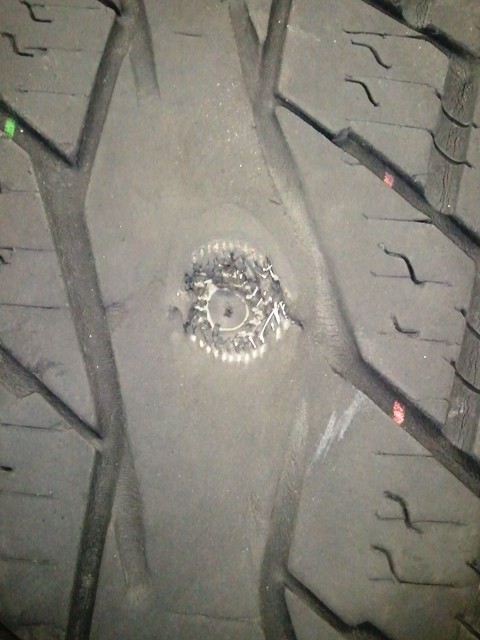 We got the limited service spare put on without getting hit by another vehicle and limped on in to Ellensburg, Since it was Sunday all the tire shops were closed. Ry paid the $100 to get someone to open up the Ellensburg Tire Center on Sunday and we arrived back in the Seattle area about 18:30 after leaving Idaho at 09:30. That was a nine hour journey that usually takes only five hours.

It could have been worse. On the way to Idaho Barb and I were a few minute ahead of Ry and had stop and go traffic over snow covered Snoqualmie pass on I-90. We weaved our way around the stopped, crosswise, and even backward facing cars, RVs, and trucks. Ry, probably less than 10 minutes behind us, found the pass closed. After it was opened up again he was an hour behind us.

Barb and I had bare and wet and even bare and dry conditions the rest of the way to Idaho. Ry had black ice:

4 thoughts on “Back to work”