Corporate greed, racial discrimination and oppression, and police brutality and murders are among the many guaranteed products of the capitalist system of production. But exploitation, injustice and oppression inevitably give rise to resistance struggles, with each of these struggles needing to be patiently built in its own right around its particular demands. Yet these seeming separate struggles are greatly strengthened when they fire each other up in united actions against the common class enemy. This is what will happen this Saturday at Westlake, and it will be another small step toward building a revolutionary movement that can win everything.

Seattle Anti-Imperialist Committee
October 19, 2011
Join the October 22 march against police brutality!
[I stopped by work today and was handed a piece of paper by the Occupy Seattle crowd. It appears to be word for word the web page linked above.

You might ask, just what is it that they want to win? From the same web page, “We demand everything!” So they want a revolution to win everything? I see…

Since I walk by the Occupy Seattle crowd every day to and from work I have taken a few pictures. This should give you an idea what it is like, minus the chanting: 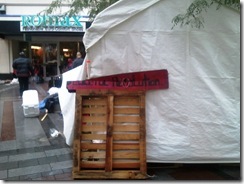 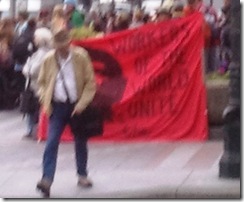 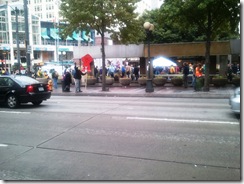 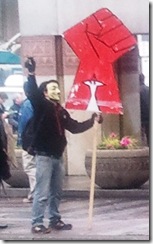 I think they are going to need a lot more people supporting them to have a successful revolution. It probably also requires a group of people capable of accomplishing something more than creating and carrying poorly made signs and pitching tents on the sidewalk.—Joe]

6 thoughts on “Quote of the day—Seattle Anti-Imperialist Committee”