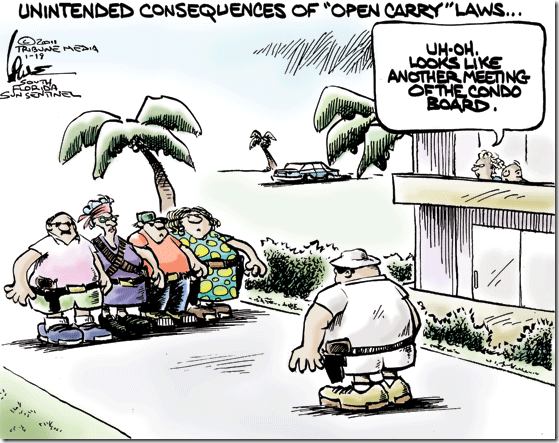 The artist is sharing their nightmare not reality. Reality is readily available should they have chosen to get the facts.

See the story that goes with this cartoon here. It contains things like:

Lost in the impassioned arguments about the Second Amendment and the right to defend oneself from government and each other is the question of what “open carry” might do to the already fragile fabric of society.

Lost on the writer is that most states have no laws prohibiting open carry and probably 100 million of us get along just fine living in those open carry states with millions carrying either openly or concealed.

Another example of the deficiencies of writers understanding and analysis:

Instead, let’s talk about what makes us civilized, and what makes America free. Guns don’t make us free.

Actually, I think a pretty good case can be made that the gun is civilization. And while guns in and of themselves do not make us free the restriction of firearm ownership and use is a sure sign that a civilization is not free.

I would claim the writer is just another ignorant bigot but the last paragraph makes me wonder if there isn’t something more than ignorance going on here:

Deep in its corporate-sponsored heart, you have to wonder if this is what the NRA really believes those learned gentlemen had in mind when they ratified the words, “A well regulated militia, being necessary to the security of a free State…”

“Corporate-sponsored heart”? I hear whispers of animosity toward capitalism in that paragraph. Is this just another socialist who knows they must destroy the means to resist their master plan to rid society of free markets and free minds?