Via email from Jonathan H.

One of my Idaho Outfitter friends hunted a group of out-of-state elk archery hunters from the Great Lakes region  last week and they called in a pack of 17 wolves by cow calling. None of the hunters had a sidearm or wolf tag and it was a very traumatic experience as the wolves surrounded the hunters!   All hunters went home early very disturbed claiming these wolves are very different from the Great Lakes wolves as they claimed these Idaho wolves actually “Hunt” you and were not afraid!

Note she is wearing gloves!  We saw almost no gloves 2 years ago!

This wolf came running toward Rene last night to attack her. She had to drop her bow & pull her pistol.  She shot it in the head about 10 feet from her.  She had to shoot it a couple more times to actually kill it.  CRAZY!  This – not even a week after Shane’s dogs were killed by wolves. 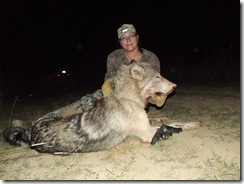 It’s not just archers that should carry a sidearm. Wife Barbara saw one while taking pictures near the Selway river last year.

12 thoughts on “Pack a sidearm”