Please accept this letter in lieu of completing an ATF Form 4473 for the purchase of four (4) CAI, Model Draco, 7.62×39 mm pistols, by Special Agent John Dodson. These aforementioned pistols will be used by Special Agent Dodson in furtherance of the performance of his official duties. In addition, Special Agent Dodson has not been convicted of a misdemeanor crime of domestic violence. If you have any questions, you may contact me at telephone number 602-605-6501. 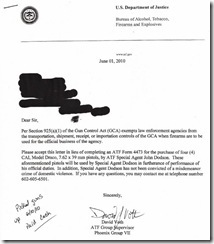 [These guns, purchased with U.S. taxpayer cash without a 4473 so as to be off the books, were given directly to the drug trafficking organizations by an ATF agent. There was no straw buyer.

I’m a pretty creative guy but I’m at a loss at finding a reason why someone would think this was a good idea unless their sole objective was to create justification for more strict firearm laws. I consider this to be on the same ethical plane as someone committing crimes in face paint such that they appeared to have black skin in order to justify laws against blacks.

The people responsible for these misdeeds need to be brought to justice. They probably wouldn’t pass muster in a constitutional challenge because of the prohibition of “cruel and unusual punishment” but I have some very creative potential sentences running through my mind right now. —Joe]

2 thoughts on “Quote of the day—David Voth”