Our second amendment protects a pre-existing, fundamental human right to self determination and self defense, including defense of one’s community and of liberty in general.  The American Founders understood all of this very well, and specifically added that, practically speaking it would deter (“hold in awe” I believe were the exact words) any army that our government could muster for the purpose of tyranny against the general population.

The phrase “…a rifleman behind every blade of grass” is often attributed to Imperial Japanese warning their own against an open attack upon the American mainland.  The story of Sergeant York was widely known at that time too.  Whether it was actually said, the reality was there and no doubt it was, and is, a deterrent.

In my neck of the woods, there may not be one rifleman for every single blade of grass, but school teachers, housewives and mothers, grandmothers, farmers, business owners and professionals in large numbers tend to own and regularly use firearms.  As for the socialists, general leftists and other nitpicking, envious busy-bodies who are incapable of minding their own business, who strive to use the power of government to beat back the American Principles of Liberty and self reliance – Here’s Lookin’ at You, Kids; 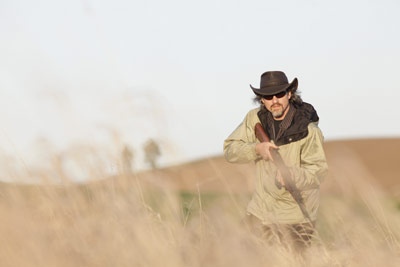 Photo by Oleg Volk.  I generally don’t believe that saber rattling is good politics, but then I didn’t start it either.  Too many people have fallen for the deep lies that form the rationalizations for Central Planning, and make no mistake about it – Central Planning (or Redistributive Change, or whatever the hell it’s called this week) by government relies purely on threats against peaceable citizens.  This has gone on far too long.

All I want to do is mind my business.  I avoid getting into other people’s faces as long as they stay out of mine.  I’m ready and willing to help out when need arises, and I understand that my own success, such as it is, in addition to setting a good example, increases my ability to help those in need.  But that is my prerogative and mine alone.  That goes for me and several million of my closest friends who favor liberty over tyranny.  So go ahead and march for “One Big Global Union”, screaming for revolution, carrying your picket signs attached to baseball bats.  Go ahead and plan ’till you’re blue in the face, and plan to carry out your threats.  I’ll be sitting here quietly minding my own business and respecting other’s right to do the same, until it comes time to act.  I hope you’re not that stupid, but I know from experience that I can’t count on socialists having a lick of sense, even when it comes to self preservation.  They tend to get themselves in far, far too deep before they even begin to understand the implications.

I’m reminded of a saying from the movie Broken Trail – “There are things that knaw on a man worse than dyin’.”

5 thoughts on “Fundamentally Transform This”