Son-in-law Caleb and I went to the Boomershoot site both yesterday and today. Yesterday we removed the remains of the first Boomershoot explosives storage magazine. I had busted it up with the bulldozer last June and finally got around to hauling it off.

Today we put some old railroad ties in place for supporting a modified 40’ shipping container in place as a manufacturing site for Boomershoot reactive targets: 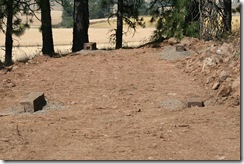 The shipping container should be delivered in two or three weeks. It’s going to be awesome to have a place to build the targets with lots of room and sheltered from the wind, snow, rain, hail, sleet, sun, and various combinations thereof we have endured in the past.

The railroad ties had been donated by Matthew and hauled to within a couple hundred yards by Barron and Janelle. There was a crop in the field and they couldn’t get them all the way to the site. Enough of the crop was cut last night and this morning that we got them in the rest of the way. We also brought in some gravel to position them. That turned out to be a bit of a misadventure.

I originally planned to just put down a tarp in the back of my SUV and shovel in some gravel at my brother’s place a couple miles away and carry it over like that. My brother suggested using the bucket loader on the tractor. Since one bucket full would be plenty a single trip with the loader would take less time than shoveling it into and out of my vehicle. Good idea.

The problem was that the heavy load in the bucket exposed a fatigued weld in the 35+ year old tractor and as I crossed a small ditch the front left wheel broke off: 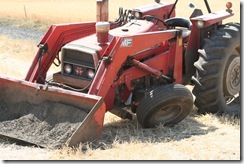 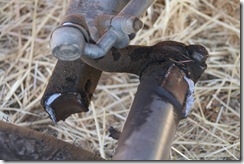 As you can see in the second picture most of the area of the weld had been broke for some time.

We ended up shoveling the gravel we needed into the back of my SUV and delivering it the last 150 yards or so as originally planned.

My brother Doug and I looked at it fairly closely and it looks like the pieces can be taken off, tossed in a pickup, and taken back to the shop for repair. It’s probably a half-day job that is relatively inexpensive.

I was just glad that it didn’t break on the county road as I was going much faster and next to a step drop off. It could have been much more serious.

Here’s an opportunity for a caption contest: 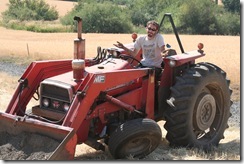