One of the most anti-gun demographics are black women. Here is a story by Joshunda Sanders that indicates things may be changing and may help affect that change:

That sense of vulnerability and fear followed me into adulthood, when I found myself, as an African American single woman, working as a reporter in Beaumont in 2001.

In addition to the pressures of learning how to be a reporter, learning Texas and being far from home, I was warned in the newsroom about active clusters of Ku Klux Klan activity. It had only been a few years since James Byrd Jr., a black man, had been beaten by white men and dragged to his death in nearby Jasper.

It surprised me to discover that I was part of a larger trend in Texas. Applications for concealed carry permits began rising in the state before the 2008 elections, an increase some attributed to concerns that anti-gun politicians would be voted in . Of the total number of licenses granted, women made up 21.9 percent in 2010, up from 17.7 percent in 2001, according to the Texas Department of Public Safety. For reasons that are unclear, black women are the fastest-growing group of women being issued licenses for concealed handguns in the state.

Adam Winkler, author of the forthcoming book, “Gunfight: The Battle Over The Right to Bear Arms in America,” traced the birth of the modern gun rights movement to the Black Panthers in the September issue of The Atlantic. In it was a fact of history that I’d never heard: “Martin Luther King Jr. applied for a permit to carry a concealed firearm in 1956, after his house was bombed. His application was denied,” Winkler wrote. “But from then on, armed supporters guarded his home.”

Closer to my demographic was the historian Danielle McGuire’s book, “At the Dark End of the Street,” which fills out commonly told stories about Rosa Parks and other women of the civil rights movement who were subjected not just to racial intimidation but also sexual violence. Among the most jarring stories of black women attacked in the South, sometimes by police officers, was the story of Recy Taylor, a 24-year-old mother and sharecropper who in 1944, as she walked home after attending church at the Rock Hill Holiness Church in Abbeville, Ala., was snatched from the street by seven white men armed with knives and shotguns. They raped her and left her for dead. It was Rosa Parks, the president of the local NAACP branch office, who was sent to investigate Taylor’s case. 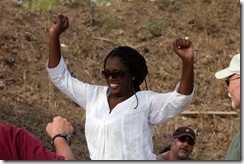 Sanders took and passed a course to get her concealed weapons license in Texas. More pictures are here.

Adam Winkler’s Facebook page is here. The excerpt from his book in the Atlantic is here.