About 1996 I was working as a contractor for Microsoft on DirectX video drivers. Some guys came from ATI (later purchased by AMD) in Toronto to learn how to write drivers for themselves. I was the guy they were assigned to.

In my office I had an USPSA and other targets with bullet holes in them. DeVerne expressed an interest in the targets and I offered to take him to the range. He quickly agreed and he shot my Ruger P-89 and a rented .22 pistol. I don’t remember a whole lot about it except I remember that as we were leaving he said something to the effect of, “That is the most fun I have ever had.” I was a little surprised and suppressed a snide remark about a guy as smart him having not discovered sex yet.

He checked into things and reported back that he could get a pistol if he went through some paperwork hoops. Hmmm… he might actually be serious about this.

I hadn’t thought much about it in a long time but then I got an email from him about a month ago:

Set the Wayback Machine for 1996/97. Remember that dude DeVerne from ATI who was stuck in your cube at Microsoft “’cause Canadians don’t like guns”, but turned out to be OK with guns, and actually worked?

I see from your blog you are still enjoying the shootin’ sports. And you seem to spend part of your time in Seattle. I am going to be in Redmond for a (no doubt) enjoyable and illuminating conference/meeting on Windows 8, and I thought if you found it convenient, we could have a coffee and shoot a deadly paper target or two.

And then I’d ask you all about good area gun stores, since I have become a ISSF pistol shooter in the past 8 years.

In the following emails I discovered:

Went to the Canadian National Handgun Championships, got 1 gold, 2 silver and 3 bronze. Did not make the Paralympic team  🙁

Paralympic? Hmmm… I wondered what that was about.

We got together last Thursday and went off to the range. He put a few magazines full through my STI. He said mostly he wanted to show me that he was a better shot than he was the first time we went to the range: 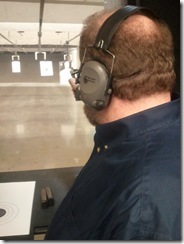 He was. And that was when he shot nothing but one handed Bull’s-eye style. But what impressed me more than his shooting was that he now owns about 40 guns! His collection includes rifles and handguns both very old and very new.

I asked about the prosthetic foot. He told me it was new since I had seen him last but the story was far less interesting than he would have liked it to have been for the price paid. It turns out the foot has an unexpected advantage to his shooting sports. It puts him in a different class of shooters and instead of being a middle of the road ordinary shooter he is a very good handicapped shooter. Hence the metals in the National Championship match.

I said would give him a link to Breda, the only other shooter I know with a detachable appendage.

I planted the seeds of a monster and now he is corrupting Canada from the inside. In Toronto even!

6 thoughts on “Planting seeds in Canada”