Son-in-law Caleb and I went out to the Boomershoot site yesterday. Caleb staked out the four corners of where we will place the shipping container for the new reactive target production facility: 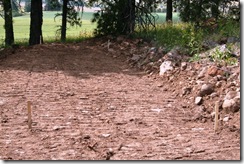 The corners stake out an area 8’ x 40’. We brought a laser level and Caleb was able to determine that I had got it level within three inches using my eyeball and the old dozer. After the crop has been taken off the surrounding field this fall we will go back in with a pickup load of gravel and put a little gravel on each of the four corner locations making the rear end about 3” higher to keep water from draining to the rear, settle the railroad ties from Matthew into the gravel, and then bring in the shipping container.

While Caleb worked on staking and leveling task I worked on getting the Wi-Fi connection set up and then did some further tests on Internet provider options. One of the options included putting an antenna on a distance hill that is visible both from Mecca (this Boomershoot production facility), my brother Doug’s home, and Teakean Butte where First Step Research has high-speed wireless link available. Doug would pay the recurring Internet bill and I would pay for the equipment and do the installation.

Currently we are getting service from a neighbor who has a satellite connection but does not have visibility of Teakean Butte. The connection is slower and cheaper than the connection from First Step, a latency you could measure with a sundial, and “Fair Access” limits of only a few gigabytes per month. Doug does not have visibility of Teakean Butte either but if I were to put up a solar powered FSR connection on the hill at the power pole in the distance (about 0.75 miles away from the Wi-Fi access point in the foreground below) I could service both all of the Boomershoot site and my brother Doug. 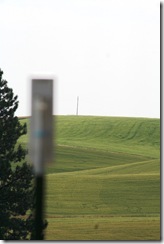 The picture above was taken with a 300 mm lens which gives about a 6 X boost from a normal view.

The question was could I make the 0.75 mile connection with the current technology I have or would I need better antennas and/or higher powered transmitters. I pointed my antenna at the distance hill, connected to the neighbors satellite powered access point via the rear lobe of the directional antenna which was about 0.7 miles away through a few trees. I then went to the distance hill to measure the signal strength—with my cell phone. I could not connect from the distant hill but I could measure the signal strength. It will work. The signal strength would probably be strong enough I could even connect with some laptop computers. Propagation was very good and the noise floor was very low. That appears to be a viable option.