Last year there was this guy that blew himself up and was in the hospital for some time but ultimately recovered. The speculation at the time was that he used Tannerite and he was extremely stupid in the application.

Even if the stupid part was correct it turns out that it wasn’t Tannerite. Darwin was unable to cure his stupidity and now the Federal Government is attempting to address the symptoms. He was arrested Monday and the affidavit for his arrest was unsealed yesterday with interesting details. His explosives included Triacetone Triperoxide (TATP) which is sometimes known as Mother of Satan because of its high susceptibility to accidental detonation.

Other interesting stuff in the affidavit indicates the world would have been much better off if Darwin had been successful. This guy appears to be someone many would characterize as a child of Satan.

Update: I found the following interesting as well. This is from the list of items to be searched for and seized in the affidavit. Notice that nearly every home has the precursor chemicals to make explosives. This is one of the reasons I say the TSA explosives tests cannot be effective and are a waste of time. Explosives can be easily made from common household materials. If the TSA were to screen for these they would generate so many false positives that the “pat downs” and extensive searches would raise the cost of TSA to even higher levels and create even more public outrage. Since they don’t test for these chemicals explosive devices can be easily made and detonated on board commercial flights at will. 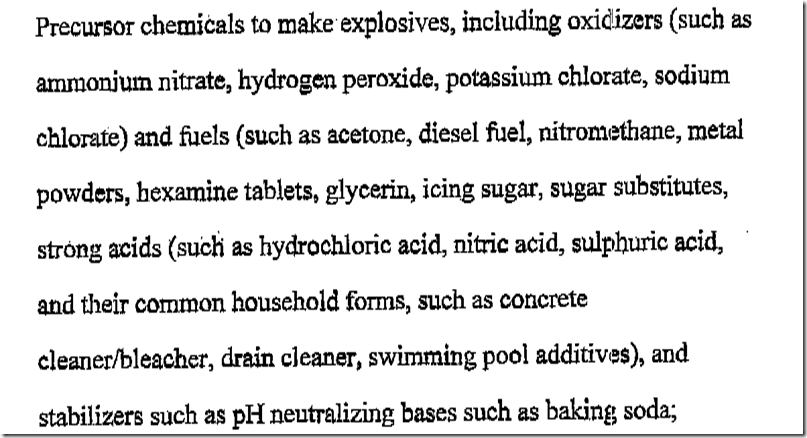 9 thoughts on “Mother and child of Satan”