Yesterday I delivered some more materials to the Taj Mahal, did some non explosive tests, took inventory, and did some maintenance.

One of the first things I did was test the new electric sifter. They claim a pound a minute for flour. If this translated to a 454 grams (one pound) per minute of KClO3 (potassium chlorate) then it would meet our needs. At our peak production rate we produce a single batch of explosives in 1.5 minutes. A single batch uses 400 grams of KClO3.

Last Thursday Ry and I had spent a considerable amount of time brainstorming how we might be able to make some modifications to it to “just let it run all day” so that even if it didn’t process the KClO3 as fast as the flour we could probably use it to our advantage because it could continue to run when we took breaks and production was slowed for other reasons.

I was very pleasantly surprised to find it would sift nearly 2 kg per minute. Although there might still be some modification which will enhance its utility I think it will be a very useful addition even unmodified.

The other items I delivered were five gallons of ethylene glycol (car antifreeze), the 50 pounds of , and a few dozen plastic containers to be used as a new target.

I still have to deliver the 275 pound drum of KClO3 in my garage and the electrical generator, but those will have to wait until the ground is drier.

I knew the ground would be wet and soft and I was prepared to carry most of the items (not the 50 pound item) by hand or in my backpack the 0.4 of mile from the road.

I parked by the road inspected the ground out past the main target area by the tree line and figured that if I chose the correct path I could make it. I was correct but it was much slicker than I expected and I spent a considerable amount of the time sliding sideways through the mud as I tried to change directions to hit the drier and more firm ground.

After crossing the field used for shooting I proceeded across the waste land to the Taj Mahal. There is one area without a culvert where the ground gets very soft with water running over it during spring runoff. I hit that spot as fast as I dared. Immediately after crossing it you must make a turn or you will drive head on into some trees. I again spent considerably more time sideways that I would have liked but I made the turn and tried to continue up the hill to the Taj. No luck. The ground was greasy slick and my four wheel drive vehicle  barely clawed its way out of the trees. Had I not been able to get clear of the trees I probably would have been stuck. I would have not been able to turn around or get sufficient speed to make it back through the standing water. 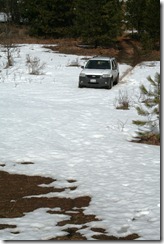 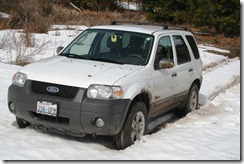 The last 100 feet probably took close to a full minute as the vehicle slowly continued to moved forward throwing mud and digging into the ground until if finally stopped in the snow.

Here is a picture after I made it back to the road: 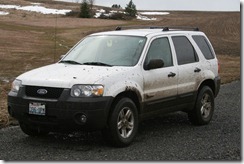 Coming back out was relatively uneventful in terms of risk of getting stuck but the muddy water splashed on the windshield which made for some interesting times as I tried to clear it and maintain sufficient control of the vehicle to keep it out of the swampy areas that would have meant an embarrassing call to my brother for help. He had advised me it was too wet to make it out there and back.