I have been sick for days but Ry came over to Idaho with me on Friday night and yesterday we went to the Boomershoot site to do some tests. Boomershoot is May 1st and time is getting short to make any last minute changes in the event. Ry has his own thoughts about the day on site and other ideas of potential here. I thought I would add a little more from my perspective.

At Ry’s suggestion, via conversations with http://www.ultimak.com/ (who blogs here), I found and purchased 100 each of some plastic containers to use for targets. These containers are actually made of a corn starch resin and are compostable. I was hoping that “compostable” would also mean “biodegradable”. Further research has revealed this is not the case:

PLA is not biodegradable in its “as-extruded” state. Instead, it must first be hydrolyzed before it becomes biodegradable. To achieve hydrolysis of PLA at significant levels, both a relative humidity at or above 98% and a temperature at or above 60°C are required.

I expected that UV light would break it down but again further research proves (from the previously linked document) that hypothesis is also incorrect:

PLA is also highly resistant to degradation by ultraviolet radiation, with no loss in elongation after 100 hours in Xenon arc testing, and minimal losses at longer exposure. Amazingly for a polymer that is readily consumed by microbes in composting, PLA does not support bacterial growth before composting.

This means that if we use these target containers we will have to pick up all the pieces of the targets that were broken but not detonated. As Ry pointed out in his post from yesterday the detonated targets are reduced to very fine shard less than 2 mm long and perhaps 1/10 that diameter. We were only able to find them because the paper labels we used to secure the lids retained a few of them throughout the explosion.

Another downside of the targets is that if you get an hit that does not detonate the target the back side of the target is blown completely open and the contents are dumped as shown in the picture below. But on the other hand it was easy for the shooter and spotter to see the target was dead. 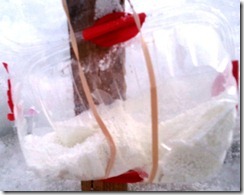 This was a hit from a 50 grain Hornady V-MAXTM traveling at about 1625 fps. Another target detonated from a similar hit (I had forgotten the satisfaction of seeing the view in the scope suddenly and silently completely fill with smoke followed by the ground shaking thump as the sound reached you 1.25 seconds later). And a third target received an edge hit without detonating. This is consistent with other tests on other target containers.

From the manufacturing and storage viewpoint these targets are awesome. They can be filled in probably 1/4 the time and with increased storage density.

One target size tested was the “32 oz Clear Rectangle Deli” which held about 850 grams of Boomerite. This compares well to the current seven inch square targets which contain about 900 grams of Boomerite. However the “active area” of these targets is significantly less. To be considered “a solid hit” the active area is only 4” x 5” compared with the nearly 7” x 7” of the previous cardboard box targets. We can get 16 of these targets into each of our storage crates which is a 33% increase over the 12 of the 7” x 7” cardboard targets.

On our way back to Moscow we talked about the test results and our major concern was that we expect there will be more spilled targets. An edge hit or failure to detonate results in a massive spill. This material must be cleaned up at the end of the day because it can spontaneously combust and result in unpleasant interactions with the neighbors. Later that night I figured out a way to easily spray the dumped targets with water and I had convinced myself we were a go for the new targets this year. Then I did the research on the UV resistance and biodegradability and am now mostly convinced we should not use them.

As of this minute my plan is to research some other plastic boxes (Ry found some and sent me links) before making the final decision on new target containers.