I have been meaning to zero my iron sighted AR for years.It was good enough to hit 7 inch targets at 20 yards or less most of the time but not good enough for anything close to precision work—even for something with iron sights. This was the reason I asked Barron to shoot the opening fireball at Boomershoot 2010.

I finally took it to the range today and got it zeroed and I tested several old magazines that had been laying around in my gun case, on my reloading bench or other random places. I threw two 20 round magazines with bad feed lips away (will that appease the Brady Campaign for a day or two?).

After I got it zeroed I did a little offhand practice. I need to practice that more because my arms got tired too quickly. But my hits were good enough considering the circumstances.

These were fired offhand from 24 yards (laser rangefinder) away at a rate of about one round every two seconds: 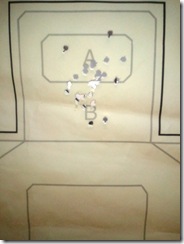 These were fired offhand from 24 yards away at a rate of about one round every second: 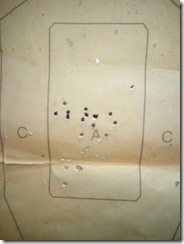 I had a tendency to jerk the trigger on that gun a little bit. I think it is because my arms would get tired and I would try to get the shot off when the sights would wander over the correct aiming point.