What’s the BC for a snowflake?

Ry Jones
January 1, 2011
[“BC” stands for Ballistic Coefficient. This is a measure of how much air resistance the a bullet has when it travels through the air.

We were on our way to the Boomershoot site and discussing the various tests we wanted to do. I said that someday I wanted to test explosives as a snow drift removal tool. Ry didn’t think it would work very well because the snow wouldn’t go very far. I wasn’t convinced. Above was his response.

Below was my response: 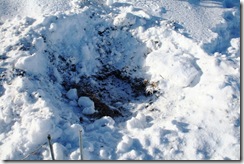 10 thoughts on “Quote of the day—Ry Jones”