Son-in-law John and I went to the Paul Bunyan (Pullayup Washington) USPSA match yesterday. It rained all Saturday night and continued to rain throughout the match. This made for some deep water in places, difficult to tape targets (clear plastic bags are put over the targets to help keep them dry), and soggy score sheets and shooters. We call it “Liquid Sunshine” and have a good time anyway.

On Friday my officemate (Priyanka), my boss (Sajib) , and I were talking about weekend plans and I told them I was going to attend this match with John, my son-in-law, who is in the army. Priyanka, exclaimed, “Oh! I’ll bet he is really good!” I tried to explain that actually I was quite a bit better at this sport than John. I’m not sure either one of them really believed me. So this is for them: I came in second in Limited Class with 90.43% match percentage while John came in fourth with 47.70%.

What this basically means (it’s not quite this simple but it’s close enough) is that for a given level of accuracy, on the average, I can shoot the same course of fire in about one half the time as John. Or expressed another way, for a given speed, on the average, I can shoot about twice as accurate as John. Why is that? The answer is I have practiced a lot more than John and for pistol shooting I have had better training. I also have better equipment than John but that is not even close to the dominate factor.

This was the first time I had shot a match at this range and they had more high round count stages than what we usually do at the Lewiston Pistol Club in Idaho where I usually shoot. High round count stages are fun. You not only get more trigger time but you get to “run and gun” too. It’s not particularly realistic for defensive shooting (the last statistic I read was that the average gun fight was over in 2.4 seconds) but generally people think they are more fun. Having fun means you are likely to shoot more. And even if on the first two and a half seconds of your average USPSA match relates to reality you end up practicing a lot more than if you only shot matches that were composed of stages that lasted less than two and a half seconds.

Here in stage 1 (12 Tiny Raindrops) I did the draw, a reload, lots of moving, and put 24 rounds into 12 targets in 12.24 seconds earning a 90.99% stage percentage. The stuff I learned about shooting on the move from Todd Jarrett while at Gun Blogger Summer Camp was very helpful—notice that I had the slowest Limited Class time but had better hits that everyone else.

The stage was 12 targets spread over a fairly large distance with barricades to go around to get to the last targets. It’s a little hard to see in the still picture and you have to watch for it in the video but there is a rope between the barrels as a fault line so you can’t get too close to the targets. 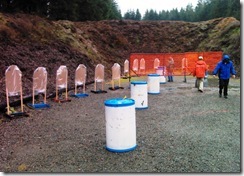 Stage 2 (In The Rain) had targets on opposite sides of the bay with barricades which made it difficult to avoid a lot of moving. Plus there were targets in moderately difficult to reach positions. 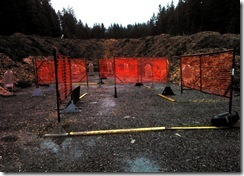 Shooting while on the move helped for some of the targets but others required full stops.

I put two rounds on each of the eight targets in a total of 13.49 seconds. This earned me a stage percentage of 90.88% and third place on this stage.

Stage 3 (Get Off Santa’s Back) was a little different. It is composed of three strings of fire. One is “freestyle”, one is “strong hand only”, and one is “weak hand only”. Although it is difficult to see in the video there are four paper targets. Two on each side of the hardcover (steel painted red) target. The paper targets are overlapping and it is difficult to see where the lower target ends and the upper target begins. The requirement was that for each string you put one bullet into each target. There were penalties for misses, extra shots, and extra hits on any given target. I got all my hits with no penalties in a total of 13.38 seconds. Nearly everyone else had a better time but my accuracy was much better. This earned me a stage percentage of 86.40%.

Some other people were not as fortunate and one person had so many penalties that they zeroed the stage.

Stage 4 (1 Tuesday #2) required moving backward! The shooter began with their hands on either side of the opening in the barricade. There are four (only two are standing in the still photo) steel targets to be shot through the opening then you had to back up to shoot two targets on either side around and through the barrels for a minimum of 12 shots. I thought I had hit the last steel and started to move on, noticed it didn’t fall, and had to return to finish it off. It took me 8.06 seconds and I got all ‘A’ hits on the paper. This earned me a 69.27% stage percentage and last place for limited. 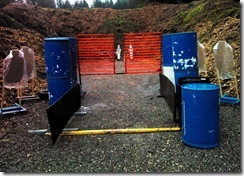 Stage 5 (I Wanna YoYo) was four banks of six steel plates. Two banks of plates could be shot from each of two shooting boxes. You were required to change boxes between shooting banks. Hence you had run back and forth between the boxes. Ability to shoot on the move is of nearly no advantage for this stage.

On my first run there was a range equipment failure about two thirds of the way through the stage when one of the plates fell without me shooting it. This required a reshoot and I did much worse the second time through but I still took second place in Limited with stage percentage of 71.91% after knocking down all 24 plates, and running back and forth, in 39.09 seconds.

I have a problem with more than three rounds on a single target. I can shoot faster than I can count and have to slow my shooting to match my ability to count. When confronted with this situation, and it works out for the stage design, I will load only six (or ‘N’) rounds in the gun. Then I just shoot until the gun runs dry. That is what I did in this case. I didn’t get the individual times or the splits between shots while at the match but I went through the video frame by frame on the first target and found that from the muzzle flash of the first shot to the muzzle flash of the last shot it took 1.17 seconds. This is an average of 0.234 seconds between the five shots. This was at a distance of about 30 feet. IIRC I had five “A” hits and one “C” hit.

It turns out that I accidently used a bad magazine (it needs a new follower) and it didn’t hold the slide open on the last shot. This caused me to drop the hammer on an empty chamber and I was somewhat surprised that the gun was empty. No matter—Sometimes a little surprise is a good thing.

I keep thinking Brady Campaign supporters must require frequent trips to Sears for their special needs with these sort of videos being put on the web.

5 thoughts on “Video from the Paul Bunyan USPSA match”