About a month ago I received an email from Steven Otterbacher at BulkAmmo.com:

Hi Joe,
I really appreciate your posting about our opening a few weeks ago (http://blog.joehuffman.org/2010/08/30/bulk-ammo/) ; things are going well and I appreciate your help!

I have an idea I wanted to run past you:

We just started carrying Fiocchi ammo and are trying to get the word out about it.  If we shipped you a box, would you be willing to give it a fair try and post a review about it?

As long as you link back to the category page on our website (i.e. http://www.bulkammo.com/handgun/bulk-.40-s-w-ammo – maybe with anchor-text like “Bulk 40 cal ammo” or “bulk 40 S&W ammo”), not the product page, we are 100% fine with a positive or negative review – whatever is truthful based on your experience – we just want you to give it a chance!
If you are interested, which product/caliber do you prefer:

If you are interested, just confirm you are on board, let me know which caliber you prefer, and then give me your shipping information (and confirm that you meet are terms of sale – i.e. you are over 21, are legally able to own this ammo, etc, etc) and I will get this ammo shipped out to you ASAP!

If this goes well, we might even be able to do a few more as time goes on!

I appreciate your time and look forward to hearing from you soon!

I accepted his offer and asked for the .40 S&W 180 grain ammo. I was on vacation at the time and there were various things like blowing up pumpkins that kept me from getting to the ammo testing until today. I don’t have a good place to do this type of testing in the Seattle area and had to wait until I could get out to the Boomershoot site.

Since I was going to have everything set up for group and velocity testing I decided to test some other ammo at the same time.

The ammo I actually received was not the JHPs but FMJ. I didn’t realize that until I got out on the range with all the JHPs I was ready to compare to. I did the comparisons anyway.

Here is my setup and the ammo used: 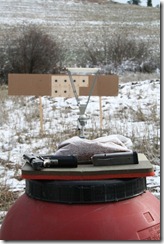 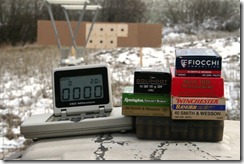 The bag of lentils was torn by the muzzle blast on the first shot and I switched to a roll of paper towels to replace the leather sandbag I had left at home.

The handloads were assembled in 1998 for bowling pin shoots. I used Winchester cases with Rainer Restrike JHP bullets over 6.4 grains of VV N350 powder.

The following table describes the velocity performance at 12’ from the muzzle. If you want velocity at the muzzle add about 4.5 fps to the numbers below.

Feeding was perfect with all ammo types.

Accuracy information can be derived from the picture below (click to enbiggen enough to see the bullet holes and the ammo names on the targets). The target on the top right is the BVAC. I didn’t label that target in the field because I couldn’t remember the name of the ammo. It was a bulk buy and I had transferred it from the original boxes (of 500 each) into ammo cans.

The accuracy was acceptable for everything except my handloads and perhaps the BVAC remanufactured FMJs. The Black Hills and the Fiocchi ammo did the best.

I was aiming at the bottom edge of the black to get the maximum contrast with the sights as that sliver of “white” disappeared into the black. The order in which the targets were shot is as in the table above.

For self-defense ammo I don’t really care much if the group size is one inch or three inches at 25 feet. Nearly all self-defense shootings are at ranges less than that and the nearly all ammo is going to have enough accuracy to hit the target. The shooter is going to be the dominate factor.

What is important is the velocity of the bullet, the expansion diameter, and depth of penetration. The penetration depth is also affected by the covering of the target. Shirts, jackets, windshield glass, etc. all make a difference. I didn’t have the time or enough ammo to do a full scale test of everything but I planned to do an expansion test with water.

As I prepared to fire into the container I tried to remember what had happened when Myth Busters did similar tests. I remembered that the 9mm FMJ had surprising depth of penetration and that the water splash was impressive. I keep thinking there was something more I should remember… what was it?

I anticipated getting severely splashed with water but that wasn’t the thing I should have worried about. I fired from about four feet above the container and only my hand and the gun got a little wet. After firing I was pretty sure I just relearned with Myth Busters had learned. The outward pressure of the water is quite strong. The pictures below tell the story: 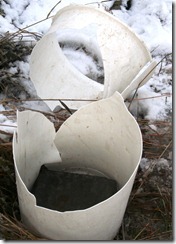 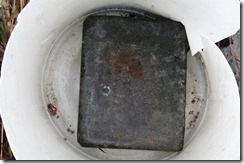 Yes. The container was blown completely in two and split down the side. The bullet fully penetrated the water and impacted the paving stone.

The bullet jacket completely separated from the core. Here are the bullet pictures (click to see higher resolution versions): 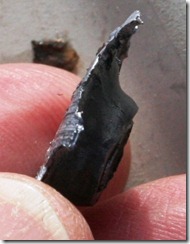 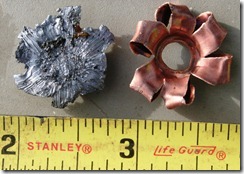 If you know your bullets the jacket in the first picture will tell you which bullet it was. If you can’t guess I’ll put the answer in the comments by EOD on Monday.