When they left this afternoon, Randy said Dan insisted on being the last one out out of the house. He locked the door behind him ending 62 years of residence on the place.

Doug Huffman
October 30, 2010
[In the spring of 1927 our Dad was not quite four years old but he remembers coming back to Idaho with his Aunt Pet and Uncle Walt. His mother had died two years earlier from T.B. and his aunt and uncle took him to California for the winter while his Dad, Cecil, stayed in Idaho to complete the purchase of a new home and farm land. When they drove by his Uncle Frank’s home he asked why they didn’t stop because that was where they had lived before they went to California. His Aunt, Frank’s and his mother’s sister, told him they had a new home. They drove on for almost another mile and as they went around a bend in the road his aunt pointed out a house on the hill above them. “That’s our new home”, she told him. Although none of the original buildings from 1927 are still standing there are newer building visible in the map image below. On the left side of the image is the location of my Great Uncle Frank’s home. On the right side of the image there is sort of a ghost road that makes a bend through some trees to the east of some buildings. That bend in the road was the site of the county road until the early 1970’s and is the bend in the road where Dad first saw the place that was to be his home for 18 years when he was growing up.

Cecil, Walt, Pet, and Ollie (first a hired assistant and later Cecil’s wife), dad and his three cousins lived there from 1927 until 1945. The land was in another family’s hands until 1949 when Dan (Randy’s father—see the quote above) bought the land.

It’s bit off topic for this post, but Dan was a Jeep driver for General George Patten during much of WW II. I sometimes wanted to ask him about that but it always seems like there wasn’t the time to do that.

My brothers and I heard stories of the dogs, cats, cows, horses, pigs, crops, trucks, cars, and tractors of when Dad grew up on the farm. We lived about two miles west on another piece of property that Mom and Dad bought when I was five years old. A few times Dan asked Dad to come over and help fix or inspect the windmill or ask a question about the granary or another of the original structures that my grandfather and great uncle built.

In the late 1960’s Mom and Dad bought the land to the north of Great Uncle Frank’s place. It is on the northern end of this land that I build the Taj Mahal to manufacture and store the explosives for Boomershoot. The participants at Boomershoot park their vehicles and set up their shelters and shooting positions on the land adjoining the NE corner. This piece of land was given to my Grandmother Huffman, Aunt Pet, and Aunt Ada (sisters) by their father (and my Great Grandfather Carey) in about 1916.

In the map image below the shooters berm for Boomershoot is just under the “ce’ in “Nez Perce”. Shooters face almost directly south and shoot into a hillside that isn’t clearly a hillside in this image:

The pictures below are from about two weeks ago when my brothers and I walked around the farm where my Dad grew up: 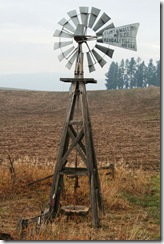 This windmill was assembled and erected by my grandfather Huffman and Great Uncle Walt in 1940. It supplied the water to the farm until about 1972. Dad plans to restore it to functional condition.

This is part of the concrete foundation for the windmill. 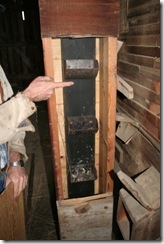 This is the grain elevator Dad, Grandpa, and Uncle Walt built in the granary which they also built.

We found old books in the original carpenter shop which had copyright dates in the 1930’s. One book that I opened had the names of my Dad’s cousins in it. Dad frequently told us stories of some of  the things his Dad and Uncle Walt built in the shop. Things like Christmas gifts and a bobsled. Dad built a carpenter shop on our farm and when I climbed the ladder for the first time, a little over two weeks ago, into the shop my grandfather built, I knew my Dad had modeled his carpenter shop on the older one. And I recalled the bobsled Dad had built for my brothers and I.

Grandpa Huffman and Uncle Walt sold the farm because my Grandpa had heart problems caused by Scarlet Fever from much earlier and he wasn’t able to do the work the farm required. Grandpa spent the remainder of his life in California working as a carpenter, in a furniture store owned by one of his brothers, and was retired for several years before dying of a heart attack when I was about 8 years old.

This land deal is another reason for the light blog posting the last month or so.

It actually makes me as much sad as it does happy to have the land back in the family again. As Dan, Randy, and the rest of their family cleaned out the buildings and auctioned off the belongings they wouldn’t have a place to keep in their homes in town I imagined what it would feel like to do the same to the farm where I grew up. I could imagine what it would feel like to have Dad walk through the house we built when I was growing up. To have him lock the door and give the keys to someone else would be very, very painful. I know it was painful for Dan, Randy and their families. They put a lot of thought into it and rationally it was the proper decision to sell the place—Dan and his wife are at an age they can’t maintain the place anymore and have lived in town for the last few years.

They said it made it a little easier for them that it was a farm family and neighbors they had known for many decades but it was still a very hard and sad decision. They plan to come back in the spring and take pictures of the crops growing and I expect they will come back near harvest time to see that too. I know I would. And they will be welcome anytime.—Joe]

6 thoughts on “Quote of the day—Doug Huffman”