Matt, my nephew’s cousin, had gone with us last year for some introductory rifle shooting.  Ever since then he’d been wanting to try his had with a pistol, and we finally got together the other day.

We started with the safety rules, and more importantly, the application of the safety rules (I’ve found that people can memorize the rules and recite them perfectly, but applying them at the range is sometimes a very different matter).  In the short time we had, we sailed through the basics: safely loading and unloading, position, grip, sight alignment, breath control, trigger squeeze, follow-through, avoiding slide bite (no blood was let that day).  Dealing with anticipation, or flinch, was emphasized and we did much dry firing.

Then we loaded the Mark II.  Matt’s a southpaw, and I was demonstrating right-handed.  That resulted in some confusion, so I took to demonstrating left-handed, but sometimes lapsed into RH operation.  I have to work on that more, for sure.  The Mark II with Remington copper washed hollowpoint ammo was a jam-o-matic that day and I’d forgotten I had some CCI which runs well in it (second mistake).  We quickly graduated to the 9 mm.

Matt and Ben went through about 100 rounds of 9 mm using a Daewoo DP-51— an alloy framed, conventional DA auto.  The light frame likes to be gripped well and solid, or POI NE POA, yet they both did very well at 10 yards.  This pistol has always been 100% reliable.  It’s nice that way.  You forget all about the equipment and just shoot.  Crap– I forgot the tap rack bang exercise.  I did load unknown (to the shooters) small numbers of rounds in the magazines so they could learn the feel of slide-lock and practice more reloads.

For defensive type shooting, I explained the concept of acceptable group size, and that if you’re shooting much smaller than that, you may be shooting too slow– the balance between accuracy and speed.

I had to crank off a few shots with my carry gun, a G20, and then Matt and Ben put another 100 rounds or so through it.  Below is Matt in full recoil with the G20.  That’s one good thing about the Glock striker ignition– it and the frame design allow a very high grip.  For a newbie, Matt did well– almost as if he’d done this before (though his RH fingers wanted to creep downward on the grip); 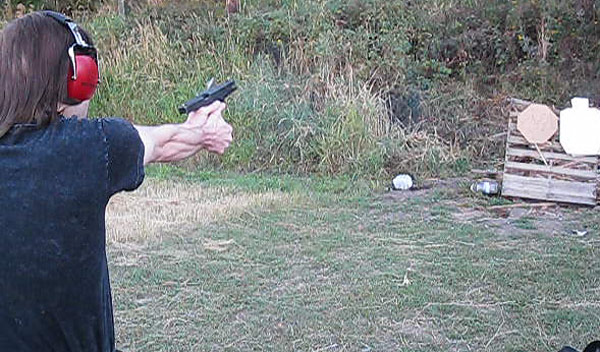 Matt went from his first shots, with a .22 rimfire, to doing well with the 10 mm auto with its fat, double stack grip, in a little over two hours.  I told him we’d barely scratched the surface of pistol shooting, and that he’d just picked up a few of the many things to practice.

That Blazer ammo (this was the 200 grain load) has a low flash compared to some.

During our venison steak, baked potato and spicy fried corn dinner afterwards, someone asked Matt what he thought about pistol shooting.  He answered; “Loved it.”  Now he’s talking about getting his own hardware.  That’s what I’m talkin’ ’bout.  We definitely have to do more of this.

Edited to Add; I also gave each of them a copy of In Search of the Second Amendment and some magazines– Guns and Ammo, American Rifleman, and American Hunter.

8 thoughts on “We Definitely Have to do More of This”