All I can do is pray that all the publicity will make them want to decide to take down the ads — so we can sue!

Alan Gottlieb
Founder, Second Amendment Foundation
September 3, 2010
San Francisco may start gun fight over pro-firearm ads
[It’s about this ad (here is a link to the photographer and larger pictures of the posters): 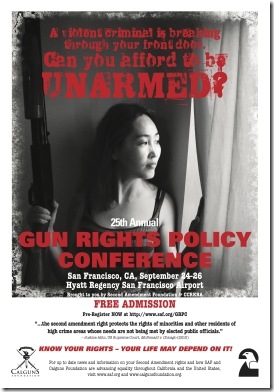 It is, as McCullagh writes, because:

A San Francisco transit agency spokesman says the city is investigating whether pro-gun ads, which an advocacy group recently purchased, should have been posted in transit stations this week.

The city’s policy on such ads is strict but clear: It says that “no advertisement” shall “promote the use of firearms.”

Have these people forgotten they live in the United States instead of someplace like Cuba or North Korea? I can’t imagine the courts siding with the want-to-be tyrants in San Francisco on this issue. Establishing more precedent for freedom is a very good thing.

Do not forget this is their goal: 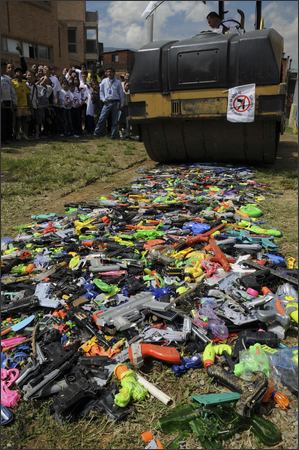 Even toy guns must be destroyed. There is no common ground with these people.

It’s nice to know the money I have been donating (matched dollar for dollar by Microsoft) is being put to good use. SAF and friends haven’t been winning all their court battles but they sure have been making good progress with their objective to “win back our firearms freedoms one lawsuit at a time”.—Joe]