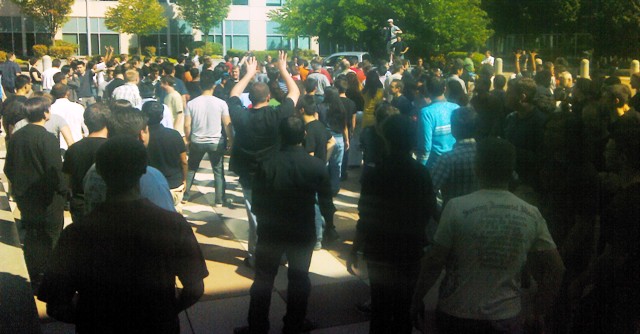 I’ve been here ten years and they have never had us dance in the parking lot before.

Mark N.
August 18, 2010
Explaining to an intern that should he get a job offer from Microsoft (he almost for certain will) it wouldn’t be fair to evaluate the future job requirements on this one afternoon’s activities.
[Mark is my boss.

It turns out we didn’t dance in the parking lot. We danced on the sidewalk.

It was an hour of attempting to teach 500 geeks about 20 seconds of dance steps and 15 minutes of filming. It went as well as could be expected. I suspect the only reason many of the guys tolerated it and stuck around is because the entire time it appeared the dance instructor was in imminent danger of a “wardrobe malfunction“.

If the video happens to make it to the Internet I was the guy in the back with the grimace moving out of sync to everyone else while wearing a Blackwater baseball cap and a t-shirt that said “There are very few personal problems that can’t be solved with a suitable application of high explosives.“–Joe]

2 thoughts on “Quote of the day–Mark N.”