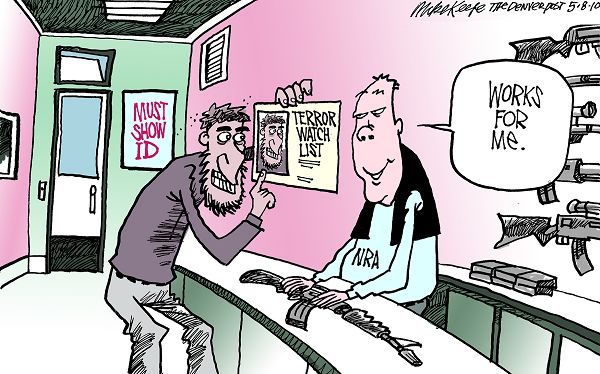 The artist completely ignores all the issues of due process, inability to challenge your placement on the list, the criteria for being placed on the list, etc. It would appear the artist believes it’s “all about the profits of the gun industry” or some such thing.

As I said over in the comments at Sebastian’s place:

My model of his (and many other) claim of “gun lobby profits” and such things is that they can’t imagine individuals actually wanting a gun unless they are a criminal or they have been duped by the “evil corporations”. I could be wrong, but it seems to me a great number of them think in terms of “everything bad is due to capitalism” or even more general in that “freedom is the root of all evil”. Their vision of utopia is government planning and control of everything.

Because of this if they don’t get their way it cannot be “the fault” of the individuals. It has to be influence of the evil capitalists. Why do you think the “progressives” want to silence their opposition (most recently Fox News, in years past it was “Fairness Doctrine”)?

As one admitted Marxist told me, “I believe in the good of society over the good of the individual.” Society/Government/Intellectuals/The-Central-Committee should make the decisions. Capitalists with their influence are the only real threat to “Society” and they should always be suspect because their motives are money and not “the good of society”. Only those untainted by Capitalist urges can be trusted to be pure and good.

At least that is the way I see their delusions working.

The concepts of a “basic human right” and a “specific enumerated right” being denied by involuntary membership on secret lists somehow don’t make it past their filters.