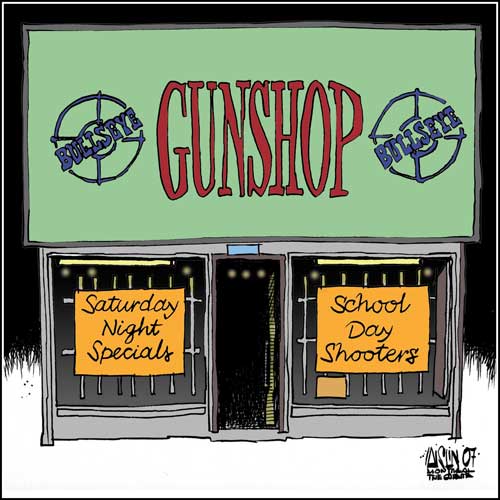 And what about the “School Day Shooters”? Did the artist really believe people advocate shooting school children? I think some pretty bad things of the anti-gun people but I am of the opinion that most of them actually have good intentions (reduction of criminal violence). But there are so many anti-gun people who seem to actually believe the pro-freedom people intend the destruction of innocent life. I suppose it’s possible they don’t actually believe their own rhetoric. They could be just telling the big lie again and again in hope others will believe it.

But I think the most likely explanation is that they haven’t put any thought into it. So many times when I have asked some anti-gun person just one or two questions they get this blank look on their face. It’s a “deer in the headlights” look. Or perhaps a better metaphor would be that it is as if they were the Emperor who just realized they were totally without clothes.