I haven’t used this gun in a while, so I’ve decided to offer it for sale.

This is the eeeeevil Striker 12, made by Sentinal Arms and sold by Penn Arms.  It has a 12″ barrel and a threaded muzzle with a split shroud-nut/thread protector designed to allow a custom-made, threaded muzzle device if one were inclined to have such a thing made.

It’s a DAO (double action only) twelve shot revolver.  The cylinder is not to be confused with a drum magazine.  It has 12 firing chambers (up to 2 & 3/4″ shells only. you could probably chamber 3″ shells but if you fire them, the rest of your day, and many after, might go poorly).  For some measure of protection from the high velocity gasses that escape the cylinder gap, the cylinder is inside a steel enclosure, which is why it could be confused with a drum magazine.  The Striker’s double action differs from that of most revolvers, in that the cylinder is rotated by a spring and controlled by a simple, beefed-up, clockwork style escapement mechanism rather than by the force of pulling the trigger.  The trigger cocks the enclosed hammer and operates the escapement.  Trigger pull is rather long and heavy.  Even so, it is equipped with a cross-bolt trigger safety behind the triggerguard.

To load; drop in a shell just as with any single action revolver, then press the thumb tab on the back of the boxlock frame to advance the cylinder one chamber, drop in another, repeat until full, then raise the loading gate.  Wind the cylinder by turning the wing nut on the front of the cylinder arbor and you’re ready to go.

You aim it by sighting down the groove in the top strap to pick up the front sight, similar to the 1858 Remington Army revolver.  The cylinder will index clockwise, lowering the loading gate automatically as you pull the trigger back to fire, and then release.  As you pull the trigger again, the first empty is now in position for ejection.  There’s a small, static feature in the back of the barrel, directing gas from the cylinder gap into the just-fired chamber,  which blows the empty out of the gun with no mechanics at all– just gas.  It works swimmingly.  When the last round is fired, you eject the one remaining empty with your off hand using the ejector rod, which is reminiscent of the old West style single action cat-ridge six-shooters.  If the cylinder was wound tight before you started shooting, you still have enough spring energy to load all 12 chambers as indicated above, whereupon you wind it again for shooting.  It will index approximately 27 to 29 times per wind, or thereabouts– I forget.

There is a hole in the top strap that could be threaded for installation of a custom-made optic mount, if you were so inclined.  That, with an Aimpoint Micro or some such, would make for a nice home defense or truck gun, methinks.

You can get 12 rounds off pretty quick, but at a lower rate than from the more conventional autoloader.  After that, it is a bit slower to load, and then you wind it.  If you fail to pull the trigger all the way back, as happens with the uninitiated now and then, or with weaklings, or when you’re squeezing the trigger and then decide not to shoot, you will have indexed the cylinder anyway, skipping one loaded chamber, leaving a loaded shell in that chamber.

This is one of the very few guns that have both a barrel shroud AND a shoulder thingy that goes up (included at no extra charge).

Push a button on the left side of the grip/boxlock frame, and the shoulder thingy goes up, around, and locks into the deployed position.  Unlike an AK underfolder, the buttplate deploys under spring tension– no extra manipulation required.

This (ahem) exquisite, hand assembled fowling piece is truly just like a work of art– simple, cheap, crude, the government has its hands all over it, and no one really understands it though we all pretend to understand anyway because it’s cool.  I bought it as part of a “You Ban it, I Buy it” program I started back in the ’90s. 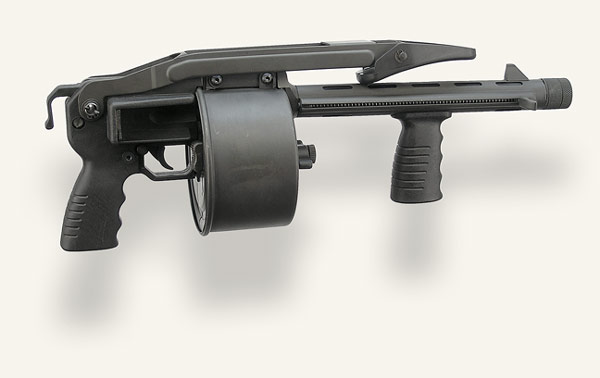 I’ll take thirteen hundred for it, which, for transferable, functional art is cheap.  NFA rules, blah blah blah, 200 hundred dollar tax, yadda, yadda..  Yes; in their mighty wisdom, benevolence, and dedication to American Principles, the geniuses at F-Troop have declared this 12 gauge, 2.75″ shotgun to be in the same legal category as towed artillery; 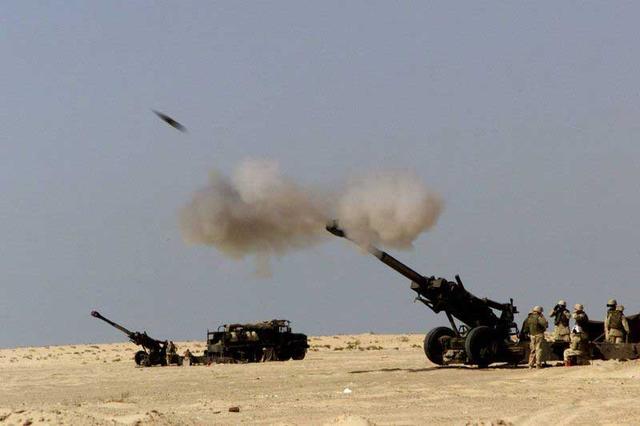 If you live here in Idaho I’m told the in-state transfer of artillery or 12 gauge shotguns is easier, or cheaper, or something.  Plus if you’re local, we can take it out and burn some nitro first (fire before you acquire).  Still; fingerprints, photos, background check, CLEO, wait, etc…for the transfer, just so you know who’s owns this country.

It also comes with a nice wooden alto saxophone case (violin cases are so yesterday) with rugged polymer covering and steel draw-latches, into which it fits like they were made for each other, which they were.  I just never got ’round to lining the bottom of the case with velvet.

It is warranted to be in marvelous condition right now.  Though used, it looks nearly new and functions as new.  There are some minor handling marks, but they wouldn’t put off even the most discriminating, upper-crust Striker 12 aficionado.  It won’t break unless you’re stupid.  Original owner’s manual included. 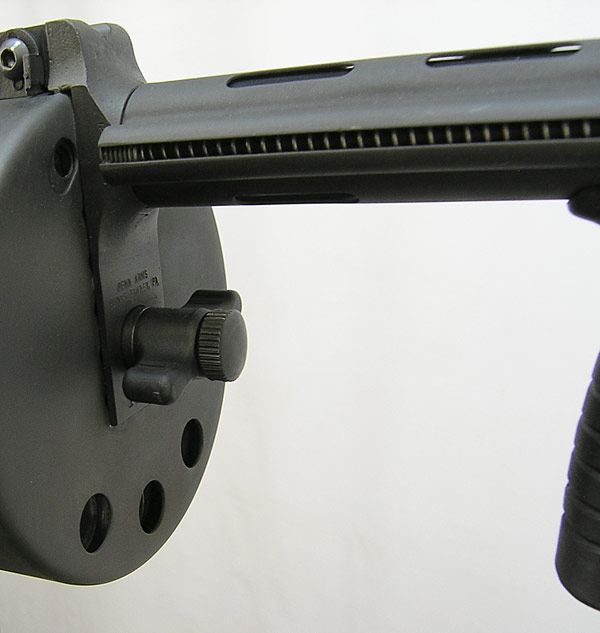 1 thought on “Includes Shoulder Thingy That Goes Up”