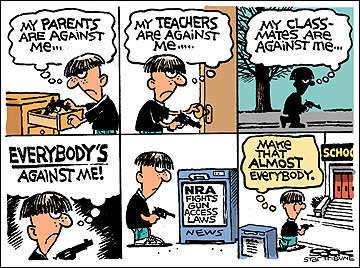 People on both sides of the issue sometimes attribute evil intent to their opponents. While the evidence is overwhelming that evil intent exists in some cases (see also here) I am of the opinion the majority of the anti-gun people have good intentions. They typically are ignorant and/or have difficulty distinguishing between truth and falsity. This doesn’t mean that their actions don’t enable or cause evil results. Hell is paved with good intentions and all that.

It could be that my sample is biased but examples where anti-gun people acknowledge pro-gun people have good intentions appear to be non-existent. Typically they attribute NRA actions as benefiting the gun manufactures and it being “all about the money”. But many examples, such as the cartoon above, exist which claim the NRA markets guns to kids and works to arm criminals.

This systematic and persistent attribution of evil intent to all gun owners and organizations is no different than attributing evil intent to blacks who demand repeal of curfew laws and laws prohibiting socializing between the races or gays who wish to adopt children.

The VPC does not hide it’s belief that gun owners and gun organizations are evil. But the Brady Campaign does not do this. They are much more moderate in their rhetoric and probably as result of this are a much larger organization. They are aware that extremism in pursuit of their goals is a loosing strategy. While I find it telling that extremism in defense of liberty does not suffer from the same handicap that is a topic for another post (perhaps Lyle would like to take this up).

I can’t help but think that asking anti-gun people what they think the motivation is for pro-gun people would be revealing. I suspect asking them this question would cause them to confront beliefs which are clearly not supported by the evidence.