I think I first saw it at Ry’s place. But others have mentioned it too. People at work have been asking about it too. It’s time I made a blog post about it.

According to the news reports a British sniper made three consecutive shots which were measured, via GPS, to be at a range 8120 feet. This is about 2707 yards which is the number I used with Modern Ballistics. I have uploaded the data file here if you want to tweak a few numbers and see what happens for yourself.

I used a high end 300 grain bullet with a BC of 0.785, a muzzle velocity of 2750 ft/sec, a muzzle velocity standard deviation of 10 fps and the inherent accuracy of the cartridge, gun, and shooter was 0.25 MOA. I assumed zero wind at 10,000 feet above sea level, and a temperature of 59 F. All are a bit on the optimistic, but plausible, side of “excellent” conditions.

The first thing that struck me about the situation was that with a 32-power, mil-dot reticle, scope the target was quite visible (the rectangle target is 18″ x 24″):

Even a 16-power scope gives a usable sight picture:

The sight angle to not require hold-over is 122 MOA. For best results a no hold-over shot is required.

Long range Leopold scopes give 70 MOA of adjustment so a shim of 52 MOA would be required for a no hold-over shot. This is not likely.

Some Nightforce scopes have 110 MOA of adjustment which would require a shim of 12 MOA. This would result in the closest range the rifle could be zeroed at under standard conditions to be about 460 yards. This seems plausible.

The articles claim a three second time to target but I come up with 4.9 seconds. My guess is whoever did the calculation assumed the bullet did not lose any velocity on it’s way to the target. Working backward we come up with about 2700 fps for a muzzle velocity.

The velocity of the bullet at the target is about 1043 fps. With a 300 grain bullet this corresponds to an IPSC “Power Factor” of 313. A 124 grain 9mm bullet at the muzzle is in the neighborhood of a PF of 135 so the sniper still had a lot of “stopping power” at this range.

On the average you would have to shoot 83 (the correct number is 4.9, apparently something hadn’t been updated properly in my simulation when I pulled the 83 off) three-shot groups to get one which was less than or equal to 1 MOA (about 30 inches). Only about 30% of the shots will hit a 18″ x 24″ target (1000 shot simulation): 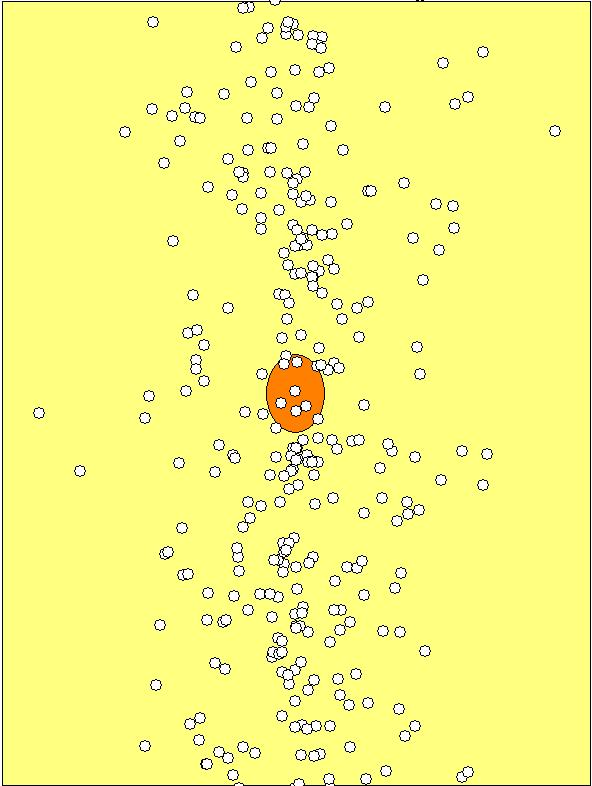 My conclusion is there was some luck involved but it is plausible the event took place essentially as reported.

Update: I have rerun some of the simulations with what is believed to be the cartridge used by the British.

8 thoughts on “2707 yard shot in Afghanistan by the numbers”