Being commander of the Catholic War Veterans Post 370 on Illinois 159 south of Belleville hasn’t been particularly trying for Mike Anthony — until they found the machine gun.

“In January, when they found it, the guys called and said they needed to talk to me,” Anthony said. “They showed me what they had. I thought it was a beautiful relic but I wondered what we could do with it.”

What they had was a Lewis .30-caliber machine gun, manufactured in 1917 by the Savage Arms Co. in Utica, N.Y., according to markings on the gun.

“I found out it was illegal to have it,” he said. “Not only that but there was a $250,000 fine and 10 years in prison. So I thought, ‘Well, it doesn’t work but previous cases showed that if it could be made serviceable, you still could get in trouble.'”

Some guys thought maybe they could give it back to the Savage company, which wanted it for its museum. But that isn’t legal either.

Instead, Sheriff Mearl Justus was able to take it off their hands, legally. But the sheriff’s department’s options are limited as well.

“We can register it and keep it, we can send it to Alton to have it melted down or we can give it to the ATF (Bureau of Alcohol Tobacco Firearms and Explosive) and it will be destroyed,” said Sgt. John Fulton, administrative assistant with the St. Clair County Sheriff’s Department. 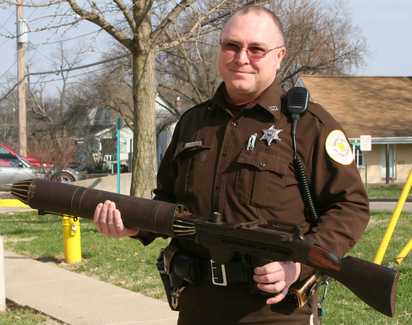 Also from the article:

Capt. Charles Chandler with a Lewis gun and Lt. Roy Kirtland, seated in a Wright Model B Flyer in 1912 after the first successful firing of a machine gun from an airplane. Chandler was the first leader of the Aeronautical Division of the U.S. Army Signal Corps, which would later evolve into the U.S. Air Force: 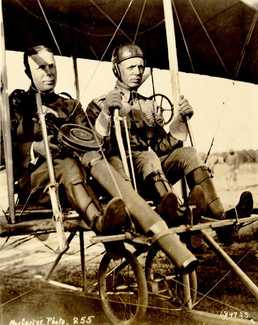 The ATF should be a convenience store–not a government organization that destroys historical artifacts.