That’s fire and brimstone.  This is pure gun geekery, and even for gun geeks its nerdy because it’s about percussion guns of the 1800s.  You’ve been warned.

Saturday, Nephew and I tried some heavy loads for the repro 1858 Remington revolver.  I’d been using a 28 grain powder charge and a round ball with decent results, but wanted to try something with more pep.  Civil War era military loads ranged from very light, to as much powder and lead as could be stuffed in the cylinder.  To start, we tried round ball (~140 grains) over a charge of 39 grains of 3F Goex with a greased felt wad in between.  That load filled the chambers completely and delivered an average of 925 fps at 10 feet with an extreme spread of 46.  Not too bad.  The 29 grain charge was yielding a velocity of about 850 fps.

It’s like pulling teeth to find acceptable “conical” bullets (“bullet shaped” as opposed to a round ball) for these “.44” percussion revolvers unless you cast your own, which I don’t.  I did find some Buffalo Bullets 180 grain jobs that fit the chambers nicely, and ordered 100 of them to try.  Since the bullet takes up more room in the chamber, the most powder I could get in and still seat the bullet below the cylinder face was 30 grains.  But, wow.  Average velocity was 1047 fps.  That’s a tad better than a .40 S&W, and matches the V of a .45 Auto load in the Speer manual for their 185 gr GDHP.  Extreme spread was 67, with a standard deviation of 21.

That was with two different people doing the loading.  I’m going to guess that with the same person loading all the rounds, the charge weight and ramming pressure would be a little more consistent, and so too the velocity.  Groups with this load opened up slightly from last week’s all-ball venture, but not enough to be sure.  This time was in direct sunlight, which makes aiming a little more difficult.

The extra pressure it takes to move the heavier bullet, which also has more friction surface against the bore, I will assume ramps up the powder’s burn rate.  More velocity with less powder and a heavier bullet.  Neat.  We’ve found a performance, or efficiency, zone.  More pressure equals more heat, equals a faster, more complete burn inside the bore, equals yet more pressure.

This is how guns (and sometimes chemical factories, engines, etc.) blow up– things look great as you increase the pressure and temp a little.  The reaction speeds up, a little bit more, things are doing fine, a little bit more and, Boom!.  A threshold is reached and a runaway reaction takes place.  You shear some bolt lugs, or burst a cylinder, etc. and maybe you go home with slightly fewer or slightly misshapen body parts.  That can be embarrassing.

I wasn’t worried about this load in a modern repro made with modern steel.  When these revolvers were designed and built originally, metallurgy wasn’t anything like it is today, and even back then they were known to stuff the chambers full on a regular basis.  Further, it makes no sense to build a cylinder that will take more powder than it can handle with the commonly used “44-100” bullets of up to 250 grains.  That would take more material and make the gun bigger and heavier, for no other reason than to encourage over-pressure loads.  I’m also running on some faith that they wouldn’t have done that (though the much longer 1847 .44 Colt “Walker” cylinder was known to occasionally let go).  Remember that back then there was only black powder, not the wide spectrum of nitro powders we have now.  All they had to control the powder’s burn rate were different granulations of the same mixture (though brand and lot inconsistency would likely have thrown in some degree of uncertainty).  With smokeless propellants you can get into a LOT MORE TROUBLE making your own loads.

Here’s Nephew torching off one of the heavy loads.  The bullet has been on its way for about a millisecond, as the gun is still in firing position and the hot gas (I mean hot– this is in direct sunlight) has traveled a foot or so out from the muzzle; 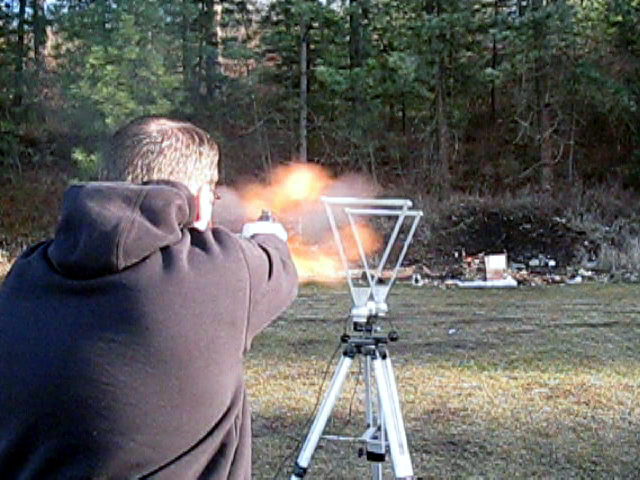 Below is the same shot in full recoil a fraction of a second later.  Forget about quick follow-up shots.  You can’t see the target until the smoke clears. By then you’re re-cocked and ready to go.  A side wind would be a big help in this case; 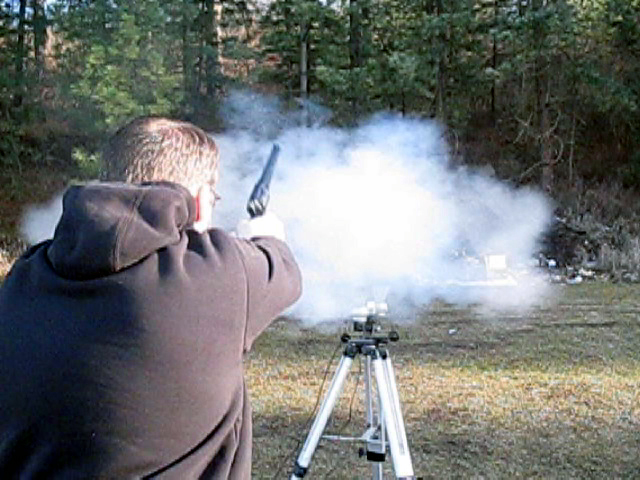 Today’s rapid fire guns wouldn’t be worth as much if they had to run on black powder.  For one thing you wouldn’t be able to see squat.  It is “interesting” to take a shot, and find that your target has simply disappeared after the smoke has cleared.  There’s that moment of uncertainty.

I like the slow, frame-by-frame animations as below.  You can see the mechanics of the recoil (though a high speed camera would be nice).  You can watch the force wave travel from his wrist, into the arm, the shoulder, and whole torso.  Nephew’s grip is fairly relaxed, which isn’t a problem with a medium weight 44 revolver.  Some people hate animated gifs on a web page.  I’m one of them, but this is for science;

You shouldn’t haul off and max out your charcoal burner just because I did.  I’m not saying it’s the thing to do.  What I can say is; I still, for the moment, have all my body parts (and gun parts) and all are operating satisfactorily, thank you.  I have a load that’s within the range of those used in the 1860s for the Remington New Model Army revolver and 1860 Colt Army, and it matches some of the .45 ACP loads for a ~180 grain bullet.

Now here’s a puzzler.  I’ve had barrel leading in modern revolvers and autos firing bare lead, hard-cast or swaged bullets.  Using pure, soft lead bullets in the ’58 Remington and ’51 Colts, no leading has been observed, even with these loads that achieve modern handgun KE levels.  I don’t know why.  Is it the grease?  But we’re told in no uncertain terms never to lubricate a modern gun bore, while black powder guns are greased all to hell.  Is it the propellant temp?  But the KE is the same.

10 thoughts on “Playing With Fire”