I’ve had an 1858 Remington New Model Army revolver for a while, but was never able to get decent accuracy from it.  Maybe it was the wrong grip fit for my hands.  Maybe it was the extra weight and maybe it was the very long creep in the trigger.  Don’t know, but it had been sitting for a long time, such that the grease was getting stiff, so I took it out alone for some exercise yesterday.

I’d been experimenting with bird shot loads in handguns because I’m interested in handgun trap shooting.  Turns out the rifling pretty well renders that a losing proposition (I could get a spare barrel for the 1851 Colt repro, and ream out the rifling. we’ll see).  Anyway, I ended up with a selection of fiber wads and cards for the .44 Remington, and since my current charge of 28 grains 3F Goex takes up little room in the chambers, and since everyone says the projectile should be close to the forcing cone for best accuracy, I added a quarter inch fiber wad on top of the powder, with a felt wad on top of that.

Now the revolver shoots OK.  Don’t know if it was the extra spacing, or that I’d been handling the gun a lot more, but I was able to match my long standing 25 yard grouping (previously held by the 1851 Colt) several times that day, with this gun.  It may not be anything to brag about, but it’s better than I’ve done with any automatic so far.  That’s 25 yards, standing, two hands, unsupported.  I’m sure there are people who can do a whole lot better, but as the saying goes, “This is my group. There are many like it, but this one is mine.” 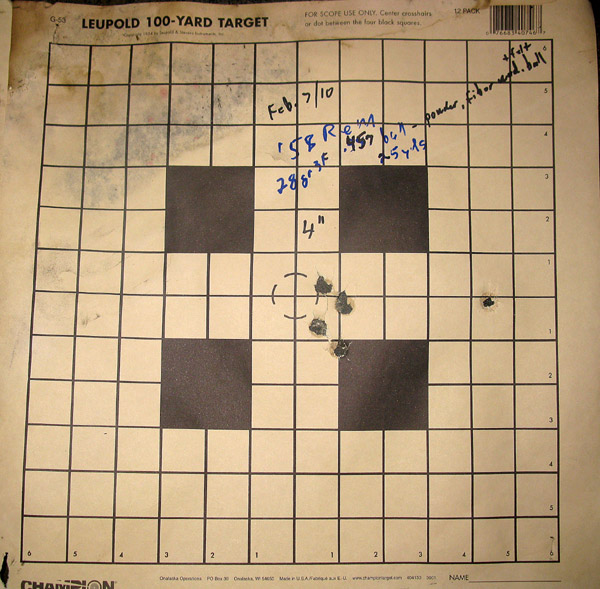 That’s the way it went several times– four shots in a decent group, with one flier.  It didn’t matter whether the group was fired from one cylinder, the other cylinder, or a combination of the two.  I shot a smaller group that day, but this one gives me hope that those four in the middle better represent the gun’s potential.

There was zero wind that day, such that when I was all done, there was a layer of white smoke that covered the whole 5 to 7 acre range.  Cool.  It also means that you have to learn to aim through a cloud of smoke.

Several shooter have written about this other phenomenon; I found myself contentedly driving under the speed limit on the way home, which is something I practically never do.  I’m usually irritated by people who drive under the limit, the lot of serene bastards.  It seems that shooting can have a pronounced relaxing effect that can last for several hours after the fact.