Even though I haven’t gotten out of bed yet (aren’t laptops great!) and have already made a couple of blog posts I have a very busy day ahead of me. In addition to the usual things like attending to hygiene, food, and clothing I need to make up a couple hundred rounds of .40 S&W and head out to the range for a USPSA action pistol match. After that I have to return to Redmond to help The Borg conquer the galaxy.

I turned off Captcha on the comments to help some people that were having problems with it. If you see a bunch of spam comments start showing up don’t worry about it. I’ll take care of them by tomorrow morning.

Update: The pistol match went fairly well. I messed up a reload on one stage or else I might have actually won. I came in second instead:

One of the most interesting stages was called “If it had been 1911”. This was to simulate 9/11. Here is a picture: 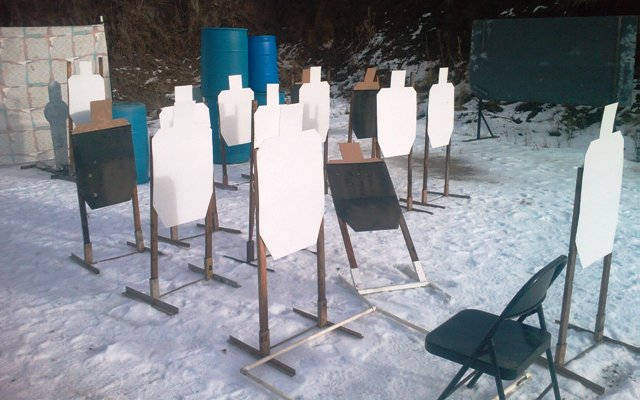 We started sitting in the chair and had to stay within the box. There is a Pepper Popper on the left in the shadow of a no shoot which activates a swinging target coming out from behind the stack of barrels on the right (simulates a hijacker come out of the bathroom).

I got 50 points (out of 55 possible–an 11 round stage) in 8.31 seconds for a hit factor of 6.0168. Pretty good, I figure, for almost all head shots except for the mover. Especially with all the hostages to avoid.

That white stuff on the ground? That is snow. SOME wimps stop shooting outdoors in the winter–but not at our range in North Central Idaho.