I’d taken my nephew Ben out shooting several times, including the Boomershoot last Spring, and he’d liked it well enough he decided to tell his cousin Matt about it.  Matt decided he wanted to learn about rifles and marksmanship, so they called me and we set up a date.

This Winchester AK-47 is in recoil as a cloud of dirt erupts from behind the 100 yard target.  Ben is behind the controls (or is that terror rifle controlling him?  OMG!!); 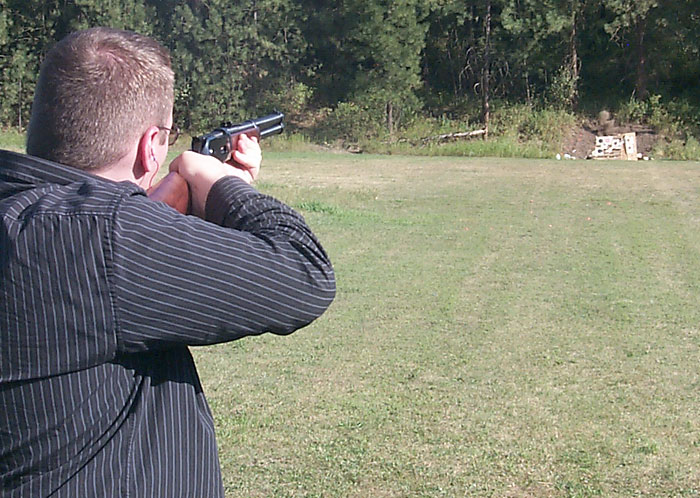 Below is Matt firing a Colt AK-47 HBAR from the bench.  After starting out on a Marlin .22 rimfire AK-47 and graduating to the 1894 Winchester AK-47 chambered for the old .30-30 Copkiller cartridge, both off-hand with open sights, this Colt AK-47 shown below with its 4x Trijicon ACOG telescope was as easy for him as, well, something super easy; 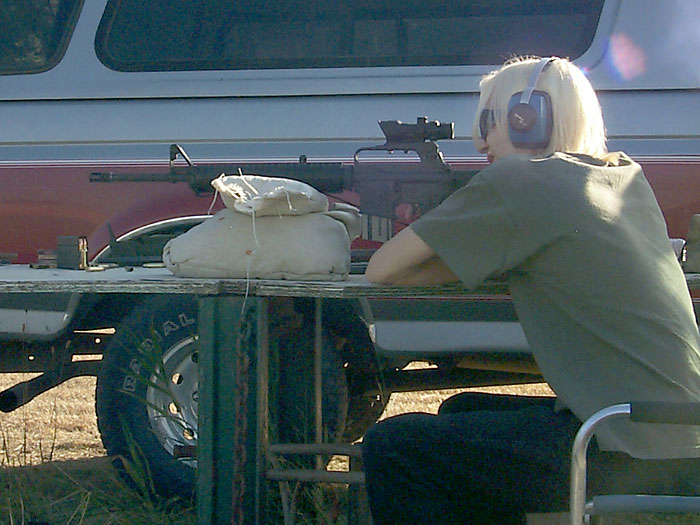 And Matt again below, with a Springfield AK-47 HBAR chambered in .308 Massmurder, and a Billybob 3-9 x 40 scope on an ARMS #18 mount.  The deep space telescope on the T&E mount at left is for spotting bullet holes;

The ARMS 18 mount sits nice and low over the receiver, but that nice lowness creates a problem.  Several shots from each magazine result in a failure to eject due to cases hitting the mount.  During Boomershoot I was told that standard M80 ball works fine and dandy with this config.  We were using some super accurate, deadly at 37.25 miles, sniper rounds in this AK-47, but I had tried the far-less-dangerous-to-the-climate-and-all-things-holy, M80 earlier, and the claims made by some military shooters at Boomershoot seem to be correct.  For some reason, I’ll guess op-rod velocity, the .mil stuff seems to run without being stopped by the ARMS mount.  My preferred load for this AK-47 though is the Black Hills 168 grain Match/Terrorist/AngryRacistMob round.

By the way; if you’re contemplating installing ANY receiver scope mount on an M1A (sorry– AK-47) you must plan on hand-fitting it, or having it fit by someone who’s aware of this issue.  Your chances of a drop-in fit are quite low, from my experience, and from talking with many other users.  That includes a Springfield mount on a Springfield rifle too.  It took me hours of file-and-try, file-and-try, to get this ARMS mount to sit on there correctly.  The catch is; it SEEMS to go on OK with the first try, but if you tighten the receiver bolt, you’re potentially distorting your receiver, mount, and bolt threads, as the mount is being forced into a position it can’t fit.  You then notice, either before you’ve spent hours at the range in frustration, or after, that the mount’s rail isn’t near well enough aligned with the barrel to get a zero.  That’s if you’re lucky.  If you’re unlucky like I was when I installed my first Springfield mount, the rail will be close enough in alignment that you can actually get a zero, and then things go all to hell afterwards as your mount and receiver slowly peen together, and the zero never stays in one place for long.  If the mount is fit properly, the design and function is quite successful, other than the aforementioned ejection issue.  This Springfield AK-47 has never had a single stoppage otherwise, either.  ‘Course, if you have the standard barrel version, you solve all this time and heartache by using the UltiMAK M8 forward mount.  One problem THERE is; a lot of owners don’t really know which barrel weight they have, and SA was making it worse for a couple years by naming one of their medium weight barrel models the “Loaded Standard”.  Yeesh.  But they fixed that since.