Sometimes I will read about “creeping socialism”. No one with a room temperature IQ, half functional news sources, and at least one foot outside the nearest mental hospital can avoid the conclusion socialism is in high gear and about to shift into overdrive at full throttle. GM, Chrysler, and the banking industry in this country are already being crushed by the socialists. Our path leads to Venezuela: 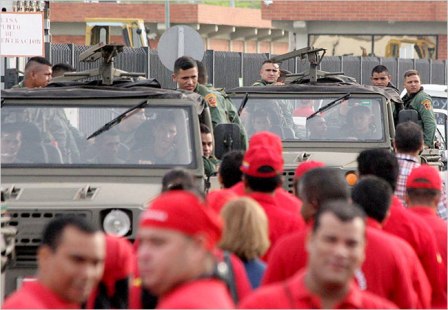 Venezuelan soldiers at an event presided over by President Hugo Chávez on Friday celebrating the seizure of contractors’ assets.

President Hugo Chávez asserted greater control over the country’s energy industry on Friday by seizing the assets of some foreign and domestic oil contractors while his government grapples with a sharp decline in oil revenue and mounting debts.

Venezuela, which relies on oil for about 93 percent of its export earnings, has not paid some of the oil contractors since late last year, according to filings by companies like Williams Companies, based in Tulsa, Okla., which said last month that it did not expect to receive $241 million it was owed here. Petróleos de Venezuela had been seeking a reduction of about 40 percent in its overall debt to the companies, which is estimated by industry analysts to be about $10 billion.

Industry representatives in the oil-producing state of Zulia said uniformed soldiers had begun occupying oil installations on Thursday, shortly before the National Assembly approved a measure allowing the takeovers. The move deepens Mr. Chávez’s control of the oil industry, following the imposition of higher royalties on foreign oil companies, raids on their offices by tax authorities and the nationalization of large oil-producing projects in recent years.

“…never again be anyone’s slave”? Really? What do you call it when someone claiming superiority over you takes the results of your work for their own use without compensation? It seems pretty clear to me the oil contractors are being treated like slaves. And as things continue to deteriorate both in Venezuela and the U.S. expect more and more slaves to be created.

I’d ask my cousin who used to work in the Venezuela oil industry what he thought of the situation but I can’t. He died while in Venezuela a while back under suspicious circumstances.