Yesterday Barb had lunch with me at one of the Microsoft cafeterias. As we were getting her a visitors badge I noticed the beer and snacks in the lobby that were stacked more than half way to the ceiling. “Oh”, I said, “It’s party time.” The receptionist said, “Yes, but it’s not until 4:30 and I don’t know who it’s for and I know people are going to ask.” I told it was for our group. I had received the “meeting notice” a day or so before that. But I don’t care for beer, am not a big socializer, and I had some unit tests and code I wanted to finish up before I take time off for Boomershoot so I didn’t attend.

What is interesting to me is that nearly every other company I have worked for had strict policies against having alcoholic beverages at work. And at Microsoft they bring it to you–frequently. I think it averages about twice a month they bring in free beer and I could literally drink on company time at company expense. I usually grab a snack and chat with people a little bit but don’t drink.

With this in mind I wasn’t surprised with the opening of a new “food court” next to the west coasts largest parking garage being built just outside my office window they were going to have a pub. Sure, whatever. It doesn’t make any difference to me.

Now (via Ry) I find out they are canceling the lease for the pub. Hmmm… I probably would have never used it but I don’t care for the apparent change in culture.

I sometimes have had fantasies of Microsoft becoming more tolerant instead of less tolerant. In particular I would like to be able to carry concealed. And having an on campus shooting range would be really cool. They have lots of soccer fields, volleyball courts, and numerous other recreational areas available. Why not a shooting range? There is a large Gun Club at Microsoft. In fact I know just the place for such a range.

I visited the new parking garage recently. Here are some pictures: 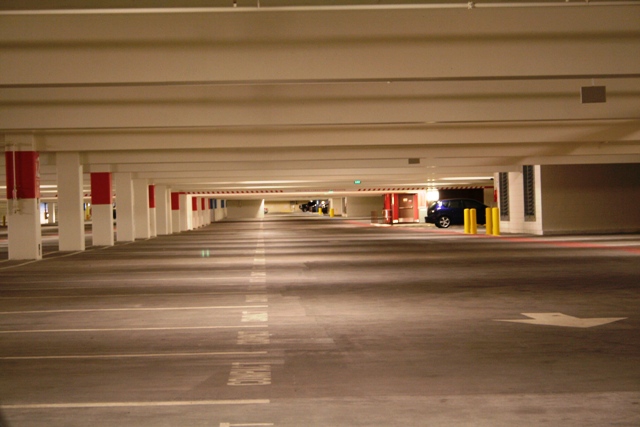 As you can see there is lots of empty space in this underground garage. And with the aid of my trusty laser range finder I found places where it was 345 yards from wall to wall. It’s not really practice for Boomershoot (minimum range is 375 yards) but it’s close. And it’s would be better than anything else within 20 miles or so.

I was discussing this with some Microsoft friends at lunch the other day and they had a concern about the ceiling height. As the range gets longer the midrange height of the bullet gets larger too. Would people start hitting the ceiling beams? In particular Jim was concerned about using a 45-70 which has a trajectory resembling artillery.

I checked out the clearance in the garage and found that with a bench 30 inches above the floor there would be some beams the 45-70 bullets would connect with on their way to a 340 yard target.

So, I have to conclude it’s not going to happen in the new Microsoft parking garage.

10 thoughts on “Things that won’t happen at Microsoft”