Son James picked me up at work a little after 1700 and we drove down the street to Ry‘s office to get that critical third person so we could drive in the car pool lane on highway 520 into Seattle.

Seattle Mayor Greg Nickels has proposed a rule that would ban firearms from nearly all city property. This is despite the State Attorney General telling him that he clearly does not have the authority to do so. Last night there was a public hearing to give Mayor Nickels feedback on his proposal. There were nearly 200 people in attendance. At most 20 or 30 of them were in favor of the proposal. I and numerous others found it extremely telling that Mayor Nickels was not in attendance.

Ry took pictures and has his own comments on the meeting. See also the Seattle PI (best) and the Seattle Times articles.

As soon as we walked in we were offered a button that identified us as opposed to the rule–as if our Boomershoot coats and my Para USA shirt weren’t enough: 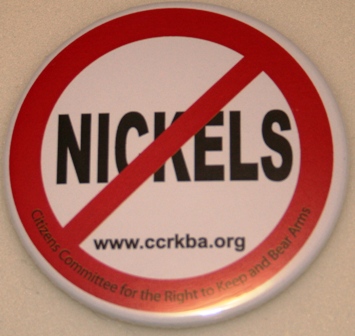 Supplied by the Citizens Committee for the Right to Keep and Bear Arms this was good thinking on their part. I really appreciate their professional contribution.

I saw many familiar faces, Alan Gottlieb and Joe Waldron (who testified) from CCRKBA, Gay Cynic (who also testified), Boyd Kneeland (Boyd does an amazing amount of volunteer work on this topic), and Michael Thyng (frequent Boomershoot attendee).

We signed in at the door as either in favor or opposed to the proposed rule and indicated whether we wanted to speak. I indicated I wanted to speak and was one of the last speakers. We were each given 90 seconds which was strictly enforced. They called our names and alternated between pro and anti-gun speakers. They ran out of anti-gun speakers long before pro-gun activists. To see the entire meeting watch for the video here later today or tomorrow (Update: video is here).

Based on previous testimony and further thought I modified my testimony some what I had planned. I ran out of time and dropped the last paragraph from the following which I composed while at the meeting using One Note on my Windows Mobile Pocket PC. It didn’t matter much because several others had already called out Nickels behavior as violating WA State law which qualified him for a misdemeanor conviction.

As usual when public speaking I left at least 20 I.Q. points in my chair when I stood up to speak and I’m sure my voice raised at least one octave. Picture from Ry.

My name is Joe Huffman and I am from Kirkland.

I represent myself and my 22 year old daughter. We both have concealed pistol licenses and carry a pistol wherever we can legally do so.

I find it very telling the people providing the number of dollars spent and people injured do not tell us how many of those people were legally shot by the police or a private citizen defending innocent life. By this omission they imply guns are only used for evil.

I’m shocked that a city that prides itself on tolerance would engage in such Jim Crow like tactics to discriminate against gun owners. I’m certain the mayor and his staff cannot answer just one question which should have been their first step before going down this path. That question is, “Can you demonstrate one time or place, throughout all history, where the average person was made safer by restricting access to handheld weapons?”

With such clear guidance from the State Attorney General the mayor has a tremendous amount of gall to push forward with such an attack on an essential civic right. If his plan were to ban the presence of Christian crosses, the star of David, or burqa from city facilities there would be a public outcry that would be heard worldwide and calls would be made for his resignation if not his arrest. And the same outcry should be made for this encroachment upon a specific enumerated right guaranteed by both the Washington State Constitution and the U.S. Bill of Rights.

I’m not a lawyer but it appears to me that such egregious behavior warrants investigation by Federal Prosecutors into the possibility of prosecution under 18 USC 242, the statute covering the deprivation of rights under the color of law.

I was very pleased there were numerous non-stereotypical gun owners testified in opposition. I think there were three self identified gay men. Several women testified including one that identified herself as a gun carrying tree-hugger, another that identified herself as a rape victim, and another that said she had spent the last several months working on the Obama campaign. Their point in identifying as such was that Nickels was pissing off people that would normally support him.

As the meeting closed the moderator informed us we can continue to leave comments until January 21st.

After the meeting several people I did not recognized came up to me and identified themselves as blog readers and thanked me for testifying. I was surprised, “What? People actually read what I have to say?” You guys know that only encourages me to further pollute the bit-stream with noise, right?

After we left the meeting Ry and I had a burger at Dairy Queen and did an after action review. Our conclusion was that since the Mayor did not attend the meeting our input was irrelevant to him. He was merely going through the formality of the process. The eight people from the city listening (see Ry’s post for more) were probably sent by him for appearances and to allow us to feel good about “doing something” in opposition to the Mayor’s attempted power grab. The only thing that will stop him is a lawsuit which I’m sure will be waiting for the City when they implement the rule.

Hence I concluded the primary result of the meeting was we got buttons.

Update: Video of the meeting is here.

5 thoughts on “And all I got was this button”