Last Saturday most of the gun bloggers at the Rendezvous went to the range. Other reports and pictures from range day are here:

Yes. As nearly everyone else noted, it was on the cold side of comfortable. The temperature was about 35 F and when we arrived the winds varied from 10 to 20 MPH. 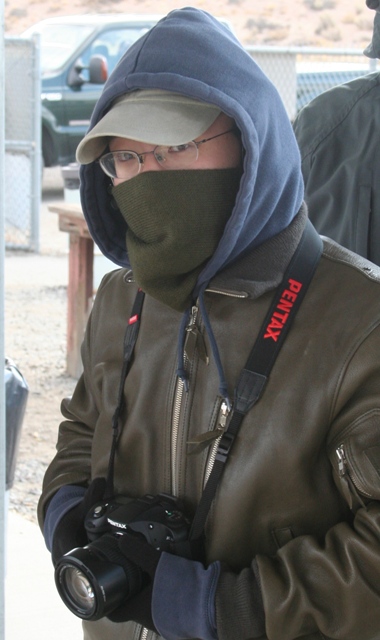 Derek deals with the cold and wind.

Traction Control brought his Barrett .50 BMG and was setting up at the very end bench. This minimized the impact of the vicious muzzle blast on other shooters. I set up on the empty bench next to him but stood behind the line when someone was shooting the .50 to avoid the vicious muzzle blast. This extended the time for my set up as I measured the wind speed, wind direction, air pressure, the inclination to the various targets, and used my laser range finder to get the exact range to each of the targets. I was still making measurements and taking notes as everyone else went through two cycles of shooting and shutting down the range to change targets. I then used my HP-41CV calculator running a special version of Modern Ballistics to compute the necessary sight angle between the scope and the gun for the elevation. I didn’t bother with measuring the incline for the targets at 523 yards and under because they were all less than 8 degrees and the resultant shift in scope settings would be less than 0.1 MOA from assuming no inclination. By the time I was finally ready to shoot there was very little wind from side to side so I didn’t bother to run the numbers through the calculator.

Here are my notes:

Having done all this I finally took my first shots at the paper target: 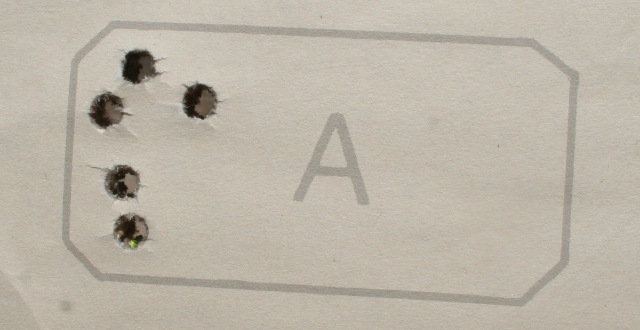 Five shot group at 197 yards at the upper A-zone of a USPA target.

I should have put a orange target dot on the center of the ‘A’ to have a better aiming point. It was difficult to get the cross hairs centered on the outline as I couldn’t see the ‘A’ itself. As it was I just concentrated on the horizontal because I was uncertain as to my windage zero but not my elevation zero. I expect most of the vertical was my fault and not the gun and/or ammo. Still, it was a less than 3/4 MOA group and I was satisfied with it.

I adjusted my windage zero and took some shots at the closer plates. I connected every time and was rewarded by seeing the plate swing and hearing a loud “thwack-clang” sound. I then asked Phil to spot for me as I adjusted for the 957 yard plate. The plate was difficult for a lot of people to find. Here is the context as seen through a 300 mm (think of it as 6X telescope) camera lens: 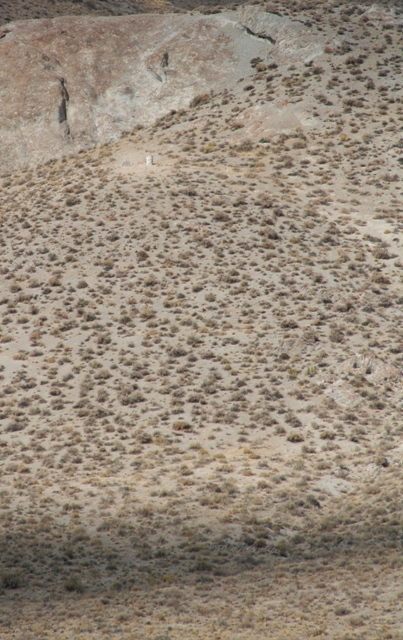 Plate and drum are in the upper left quadrant. 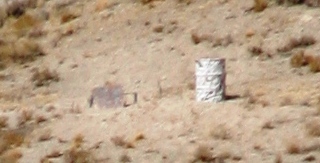 A 55 gallon steel drum is about 22″ x 34″ and based on that the plate appears to be about 30″ x 16″. My mil-dot reticle estimates agree with this. The wind was very low but even a 3 MPH wind would result in a miss if I aimed dead on at this range. I waited until the wind appeared to be zero and pulled the trigger. Phil reported it hit just a bit to the right of center and dead on for elevation.

A first round hit at nearly 1000 yards. The geek wins!

The rest of the day was anti-climatic for me. I shot at the 957 yard plate a few more times but I ignored the wind and got hits only about half the time. I shot 10 rounds out of Traction Control’s .50 (I brought my own ammo) and got 7 out of 10 hits on the drum. The .50 has a much better BC (1.05 on the 750 grain A-MAX versus 0.533 on the 190 grain Sierra Match Kings I was shooting) which helped on windage but I suspect that gun didn’t have the inherent accuracy because the target was bigger and I got essentially the same hit ratio.

I emptied a magazine (four rounds) into each of the closer plates and knocked down the 523 yard target with my last shot. As it appeared everyone remaining from the Rendezvous was waiting on me I packed up and left. I was done as soon as I got the first round hit on the 957 yard plate. That was all I was really interested in anyway.

By the end of the day the apparent elevation had changed to 3700 feet but I ignored this as it made only about 0.1 MOA difference at 957 yards. Had it warmed up 10 degrees to 45 F that would have made a difference of 0.28 MOA in the same direction and I would have taken two clicks off of the scope setting for the most distant target to account for both.

Update: The picture below is from last year and the target is out of focus but it does give a sense of the size of the target as seen in a 14X scope. The drum is 2.5 Mils to the right of the plate which is almost centered in the crosshairs. 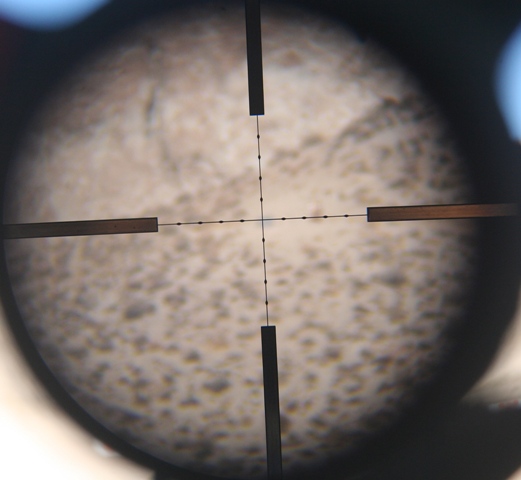