Last night the cops visited to try to help resolve an incident when Boyfriend From Hell of the landlady at my underground bunker kicked in her bedroom door. I was at work at the time but Barb was there and called me to let me know what was happening. I left work immediately and told Barb to tell the cops I would be entering through the rear tunnel and that we would stay away from the action going on above ground.

Shortly after I arrived and greeted Barb the landlady knocked on our door and wanted to talk. A couple of cops showed up a minute or two later and stepped into my bunker to offer some advice to the landlady. I was packing with the only thing concealing my STI Eagle and a spare 18 round magazine was my Boomershoot coat. It was much too warm in there and I wanted to remove the coat without alarming the cops. Even wearing the coat probably seemed a little odd and the cops might have guessed I was packing just from that but there was no need to openly display the gun on my hip. In full view of the cops, but hidden underneath my coat, I untucked my Boomershoot golf shirt and used the tail of it to cover up the equipment on my belt and then took off the coat. I draped the coat over the target on the back of a chair from my testing the Gun Blog 45 a few days ago: 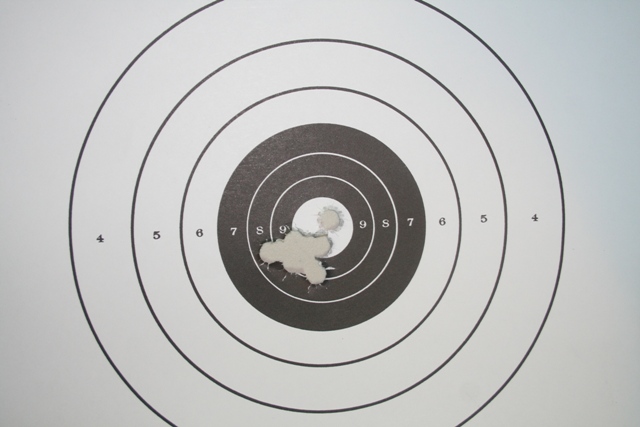 About five feet away from the cops, leaning up against a dresser was a rifle case. About eight feet behind the landlady they were talking to were two IPSC targets on the wall I use for dry fire exercises.

I wonder if the cops suspected there were guns nearby? If so, they didn’t give even the slightest hint of noticing. I did find it a little odd that one of them gave me his card and told me his cell phone number was on there–but they didn’t give the landlady a card or even their names.

I find it hard to believe they were so incompetent to not notice and would rather believe they were cool with it. Especially since they said they couldn’t leave her there if she was afraid for her safety (which she said she was) with the boyfriend who can’t currently be evicted. My offers to give her advance rent money on the spot to stay in a hotel or to stay on our couch went over well with the cops and they finally left.

Barb and I took the landlady to a restaurant for some food and she slept on the couch in our room last night. She left my underground bunker this morning without Barb or I talking to her and I can only presume she is working on getting him legally evicted today since she called work last night to take a day of vacation today.

I’d offer to loan her a gun but Boyfriend From Hell manages to keep stealing cell phones and keys from her purse so I don’t know how she would manage to keep a handgun away from him.

More details will be posted as they become available.

7 thoughts on “I wonder if the cops noticed”