As we were filling out the paperwork so I could be approved to exercise my Constitutionally protected right to own a firearm the clerk behind the counter asked, “What model is that?” I thought about it a moment and said, “I guess we can call it a ‘Gun Blog 45’ just like what it says on the side.” He agreed and after 45 minutes of paperwork and a phone call to the FBI (the first NICS check ever done on me–I always managed to avoid them with my concealed weapons permit in the past) I got my Para-USA Gun Blogger Summer Camp gun last night. The same one I shot last month at Blackwater. Yeah, I purchased the gun I said has a Pri 0 bug. I was convinced by several people that learning to shoot it right wasn’t that outrageous of a suggestion. 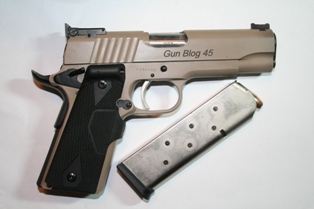 I immediately bought some ammo–230 grain FMJ Magtech (the cheapest ammo on the shelf) and 230 grain Winchester Ranger (hollow points). I went to the range and loaded up one magazine of each. I put my targets at 30 feet which is the same range as the target that came with the gun: 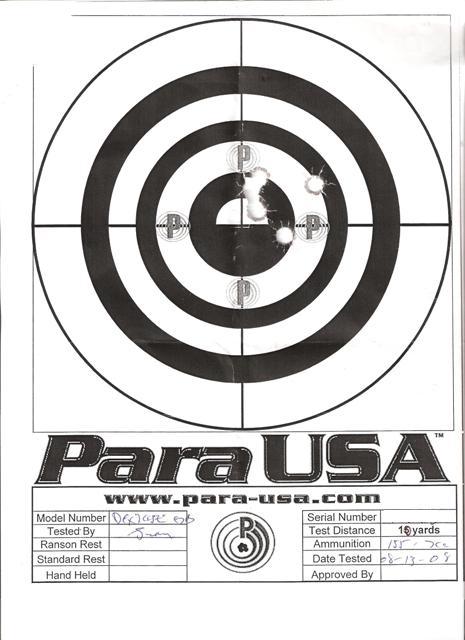 I loaded the FMJ ammo and fired a shot. The gun failed to feed the second round into the chamber. Grrr… I had lots of problems with that at Blackwater but the problem went away after shooting a few hundred rounds and then lubricating the dirty gun. But this time the gun was clean and fully lubed. I racked the slide and continued to fire and had no further problems.

I was fairly satisfied with it: 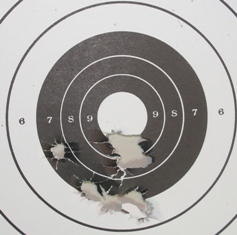 I fired all eight rounds of the Winchester Ranger without incident except the last round which I pulled a little bit when I fired:

This was better than the factory target!

I didn’t do any fast shooting as I had other things I wanted to do last night. That will be coming up soon. I need to see if I can train myself to shoot fast while taking my finger nearly off the trigger between shots.

The batteries appear to be dead in the laser grips. There is just the faintest glow coming out of them. I bought some new batteries but haven’t installed them yet. A report on Crimson Trace Lasergrips will be coming soon. I have two guns equipped with them now.

Others who have received their Gun Blog guns from Para-USA: