Six of us made it to the event (click on the pictures to see higher resolution versions):

Barb insisted I should post a picture of myself as well, so here it is: 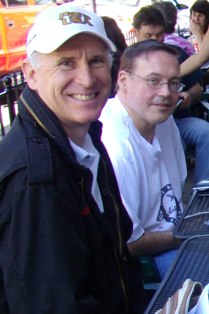 We had a nice time. No concrete plans to take over the world or anything. A report on Gun Blogger Summer Camp was requested. Gay_Cynic wanted to know if Tamara was as delightful in person as she is to read. I said she was but she seemed a little bit shy which I didn’t expect.

Phil and I talked about our plans for guns to take to Reno next month.

We talked about Seattle Mayor Nickels attempts to break the law and ban gun owners from carrying on City property. Phil reports Nickels will release his plans after getting an opinion from the state Attorney General. If I recall correctly Phil said that was due out on October 20th which will be in time for the election.

In response to something American Mercenary said about Democrats and socialism I said those people have a different set of basic assumptions about reality than I do and Phil says he will have blog post about that on Monday. I’m looking forward to it.

American Mercenary informed us about the use and misuse of full auto in the army. He explained a use I hadn’t really thought of before. He said a machine gun set up in a street can prevent anyone from crossing for many hundreds of yards but that same gun on a roof is of limited use.

Barb and Misty talked extensively about being the wife of a military man. Xenia will soon be in that position and Misty has been living that life for quite a while now. Barb arranged for Xenia to take some pictures, “When Misty has her baby.” Of course this was ambiguous to me. My first inclination was this probably meant during delivery–which seemed a little odd. But the shock on Barb’s and Misty’s faces when I wanted clarification on this point got me on the right track.