I had seen the graphics below before but just shook my head and went on. Reader Rob sent them to me today and pointed out it’s self-parodying. They are from the main page of the Brady Campaign website. 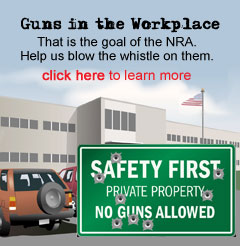 In the first graphic they actually say guns murdered people. It seems to me if that is the case all those biologists trying to create and/or modify life in a “test tube” should be redirected to study common metals, charcoal forges, hammers, and drills. Apparently the secret to life was discovered with the invention of the first firearms four or five hundred years ago.

Okay, so maybe I was taking them a little too literally. But my point is they twist the meanings of words to achieve their goals. It is only by telling half-truths and sometimes outright lies that they can achieve political traction. We need to rub their noses in it in a very public manner.

In the second graphic they try to take advantage of a negative stereotype of the gun owner as a vandal who shoots up a sign. They also imply that disallowing guns makes a workplace safer. To test that hypothesis answer this question, “Which is a safer workplace, a maximum security prison or a police station?” Nearly no one has a gun in the prison (including the guards who are in contact with the prisoners) and almost everyone has a gun in the police station. Of course the police station is safer–because the people there are much more likely to be trustworthy people. It’s the people, not the guns, that make the difference.

In the world view of the Brady bunch the concept of there being more than one variable that contributes to personal safety is too difficult of a concept. Guns have no will of their own and are tools that can be used for good or evil but making the intellectual leap from the gun to the person pulling the trigger is just asking too much of their feeble brains.

Either that or they have mental problems.