As you should already know:

The ATF Special Agent doing the talking in this video about Cavalry Arms is no stranger: 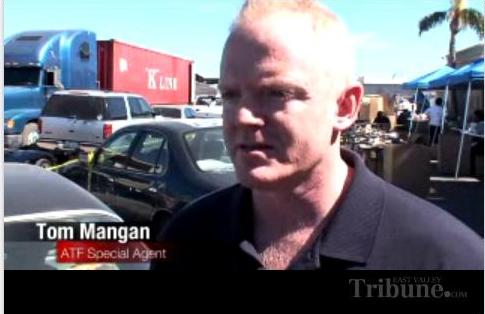 I’ve blogged about him before.

Here are some other times he has appeared in the news and what he said:

”These are, quite frankly, weapons of war,” ATF special agent Tom Mangan said as he picked up an assault rifle and examined it. “These are military-type weapons. This is firepower you would expect to see on the battlegrounds of Iraq and Afghanistan.”

Agents said Thursday they found the 42 weapons in a storage locker about 10 days ago. The guns were worth $250,000 in all: Belgian-made ”FN” handguns, semiautomatic AK-47 rifles and other pistols. They also found four olive boxes loaded with .50-caliber bullets – ammunition that’s big enough to take out an airplane.

Put him on your list of people to be charged with violation of 18 USC 242.

2 thoughts on “We know this guy”