I’ve been doing a little research into microstamping. High emotions on either side are not productive. I’ve tried to gather facts and sources for your own research.

This was instigated at the suggestion of Justthisguy in the comments.

First off I would like to point out there are two types of microstamping. Neither of which should be confused with “ballistic fingerprints”.

Ballistic Fingerprints are Dead for Now

“Ballistics fingerprints” are a system where law enforcement obtains a bullet and cartridge casing from the manufacture for every new gun. Maryland and New York have passed laws requiring this and at last check not a single crime had been solved with this additional data and Maryland State Police were advising the money should be spent on something more effective.

This concept is about putting matching serial numbers on the bullet, shell casing, and bullet box. Of course there would have to be a database that tracked the bullets from manufacture to the end user. It is impractical for many reasons.

I don’t expect this to go anywhere in the immediate future.

This is about putting unique codes (essentially a serial number) on the firing pin, breach face, ejector and extractor. Typically you will hear the example of the firing pin being marked but actually there will be markings in other places as well. Some people pretend it’s a secret where these markings will be. Anyplace that strikes or presses against the shell casing is a potential location for imprinting the codes. This includes inside the chamber but those marking are at high risk of being sheared or smeared away in semi-autos during the extraction while there is still some pressure in the barrel and casing.

This technology poses the greatest potential to be generally implemented and California passed such a law on October 13, 2007. This law mandates the technology be used on all new firearms sold in California beginning on January 1, 2010. It requires the microscopic codes be put in two or more places such they are transferred to the cartridge case.

The claimed benefit of the proposed technologies is the promise of making it easier to solve crimes committed with firearms.

The arguments against the use of the technology center on the ease of a criminal defeating the technology, the difficulty of manufacturers implementing it, the risk of innocent people being framed, and the increased costs to all gun owners.

The National Shooting Sports Foundation, Inc. has a document on microstamping that outlines the problems from the manufacturer’s viewpoint and the Association of Firearms and Toolmarks Examiners, and that it will not reduce crime. Other documents I found on the NSSF site probably have serious flaws and shouldn’t be used as reference material.

Todd Lizotte is a co-inventor of firearms microstamping. Here is a video of him describing and demonstrating the technology. He also commented on David E. Petzal’s Field and Stream blog. I have extracted his comments from this blog and uploaded them here. One of his arguments is the following (a copy and paste with typos intact):

I am not sure a defensive strategy to protecting rights has ever worked. A proactive stretgy always keeps the fight off in the distance. Microstamping does not change the status quo, all data is at the manufacturer. No registration, no licensing and no imaging.

What many people are not aware of is there is a new 3D mapping imaging system being produced. We helped successfully defeat ballistic imaging for new firearms, however the ATF and its vendor are not giving up, the ATF has a $500 Million system in place for linking current ballistic imaging data from crime labs. The company who built that system, located in Quebec, needs to expand its market, it needs to capture the new firearm market.

The old system they built can not accurately imaging new firearms, however it is possible for the new 3D system to work at a much larger expense.

Microstamping neutralizes the need for imaging all togther.

In the end I am for being proactive, instead of being reactive.

If you want to see how bad it could really get, google 3D ballistic imaging and see how costly that system will be, since that system will require all info on the pruchaser and firearm to be entered into a government controlled criminal database.

I am not sure most people understand this fact.

Microstamping is a perfect technology — completely benign and all data remains at the firearm manufacturer.

In essence of what he is saying is the alternative to microstamping the firearm is a much more expensive version of the “ballistic fingerprint” system implemented with better technology and the associated additional databases.

Because no new database is required, only an additional entry in the manufacturer’s database with the serial number, firearm microstamping gets around a number of the arguments against “ballistics fingerprints” and bullet/casing microstamping. For this reason I expect the anti-gun people to push this technology the hardest and have the most success with it.

The best argument against microstamping of firearms is the manufacturing process does not lend itself to serialization of multiple parts. The firing pins are made by some supplier, the extractors, ejectors, and slides by other companies. The manufacture of the gun itself may just assemble the pieces. Each of the serialized parts must be matched with the frame that has the actual official firearm serial number. The code on these serialized parts are not visible without a microscope and all would have to be verified and recorded in database during the assembly process. This will make it expensive and error prone. This argument will not gain much traction with the anti-gun people because increasing the expense of firearms is not regarded as a problem.

The next best argument is probably that criminals can easily defeat the technology. This seems indisputable. Changing of firing pins, extractors, ejectors, and barrels is commonplace in the gun community. A few minutes with an grinding stone on a Dremel tool will obliterate the laser etching without affecting the functioning of the firearm. The counter arguments are somewhat weak; 1) Criminals aren’t very smart; and 2) There are redundant markings.

The framing of innocent people is probably the weakest of the arguments against firearm microstamping. The powder residue and other forensic evidence will eliminate most planted shell casing from the real shell cases involved in the crime. Multiple stampings from reloaded shell cases also are probably easily eliminated with the available forensic evidence. It will slow down the process however, but probably no more than it would if they were to do it with existing forensic technology and this appears to be a non-problem. Of course this assumes the prosecutors and law enforcement are forthright and trustworthy in dealing with the evidence. I am inclined to believe this is generally the case but the actual instances of unethical actions of our government officials is much higher than I am comfortable with.

The following pictures are from Forensic Technology and show the level of detail possible with modern microscopes. 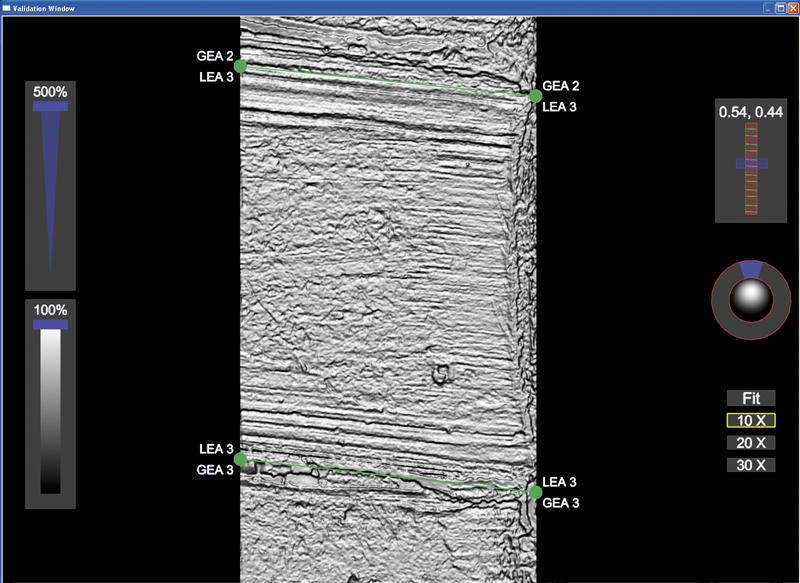 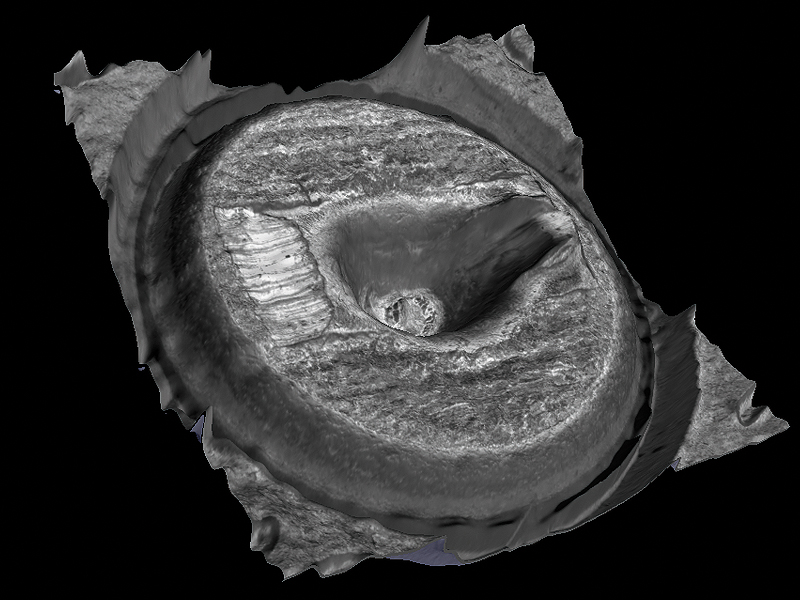 Update: The following pictures are from The Coalition to Stop Gun Violence’s PowerPoint presentation: 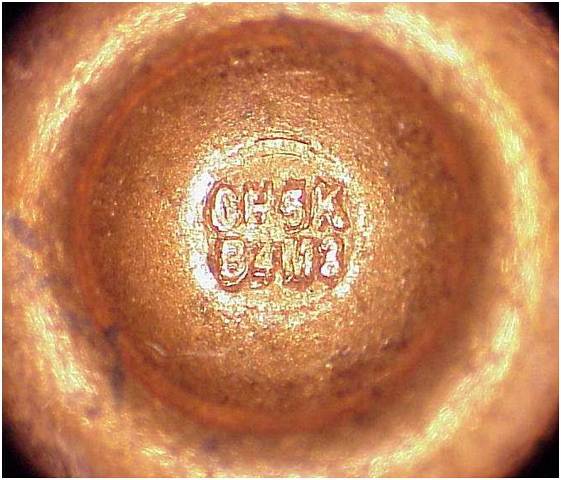 Primer after 2500 rounds through a Thompson SMG.

Primer from a Glock after 1400 rounds. 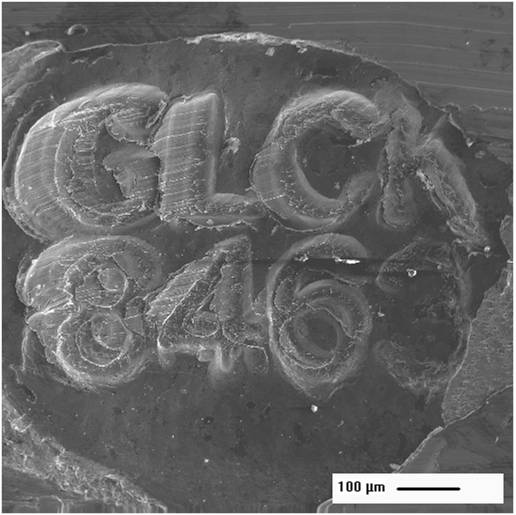