Joe (a different Joe) ROs Don as he blasts through a stage. Yes, Joe’s shirt says “INFIDEL” on the back (and the front).

That’s Adam with the “air gun” practicing for the next stage. 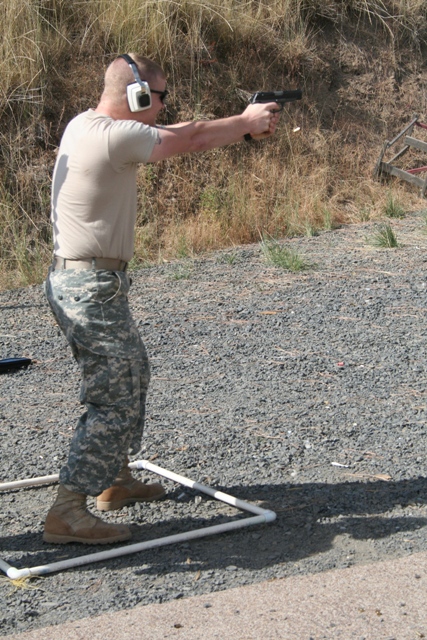 As I mentioned in the QOD yesterday Xenia’s boyfriend John went with me to the match. 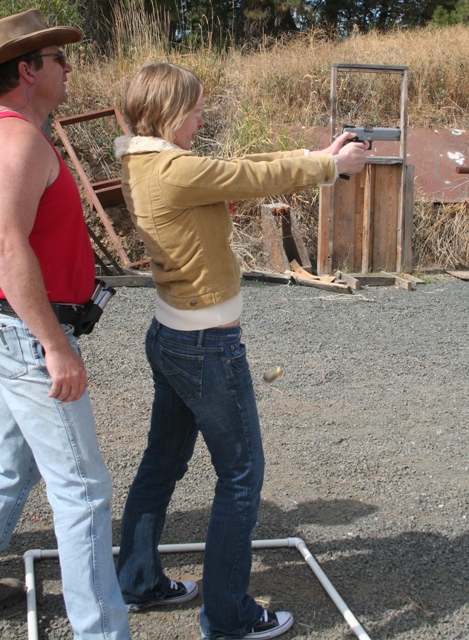 Michelle and Adam as he ROs while she shoots a few rounds.

We also had an anthropology grad student, Michelle, from Washington State University show up. I asked if she knew “Joan”, an anthropologist from WSU who has studied the gun culture. She claims to not know Joan Burbick (and here and here). Michelle has only been in town for a few weeks having just arrived from Iowa. She also said she is a Evolutionary Anthropologist while Joan is probably a Cultural Anthropologist which means they wouldn’t be as likely to meet each other. Since I was wrong about Joan being an anthropologist it’s quite believable.

We managed to talk her into shooting a little bit. She also claims to have only fired one gun on one occasion. Had it not been for her poor posture while shooting I, and probably everyone else, would not have believed her. In her first six shots I think she only had one miss. She did amazingly well for a completely new shooter. She emptied two magazines out of two different guns and didn’t develop a flinch which is quite common with new shooters with a fairly large caliber handgun.

I spent several minutes talking to her and answering questions. The questions had some anti-gun bias and I finally asked what her sort of opinion she had on guns. She said as anthropological observer she was not allowed to have an opinion.