Yesterday the Daily News ran the article they were working on about fully automatic firearms. I posted about the trip to the range with the reporter and the photographer on Thursday. The article itself is very factual and I would say unbiased–given the assignment of writing about full autos in the context of a multiple homicide. The “More restrictions or better enforcement…” part was probably put in by the editor and illustrates how you can get screwed by just one bigot in the pipeline of people the information flows through. Most of the article requires a fee to access on-line but here is the part visible for free: 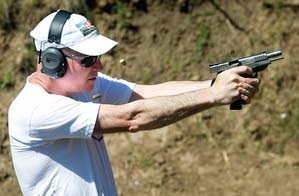 Fully automatic; More restrictions or better enforcement could be key to questions about weapons

When the shooting spree ended, four people were dead, three were injured and 185 bullet casings littered the parking lot of the Latah County Courthouse and the inside of the First Presbyterian Church across the street.

Despite that fact, some people say there are enough restrictions for automatic weapons to keep the firearms from being readily available and used in crimes. 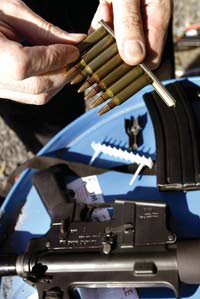 Geoff Crimmins/Daily News
Joe Huffman loads ammunition into a clip for his AR-15 carbine at a shooting range south of Troy on Thursday.

Geoff Crimmins/Daily News
Joe Huffman explains how to line up the sights of a gun on a target at a shooting range south of Troy on Thursday.

It’s not easy to see in the picture here, it’s much more visible in the dead tree version, but there are three shell casings in the air in the first picture. One just above the chamber of my pistol, one that appears to be in front of my eyes, and one just off the point of my chin. I estimated I was firing about three rounds per second. All hit the target. Nearly all were in the A with a few in the C zone of the IPSC target. The picture shows me leaning backward a great deal and it seems the pistol has recoiled a great deal more than is actually the case. I’m certain the camera wasn’t parallel to the ground and that I was actually leaning into the shots. The target was probably only about three and a half feet high at the “shoulder” instead of the typical five feet.

The loading the clip picture came about because I was fighting the battle against calling gun magazines clips. My son James says the battle is over and it is lost but I keep trying and explained the difference to Omie and Geoff. They got the caption to the picture right but I’m not sure it helped my cause any.

Some good has come about from the article already–I received an email from someone who saw the article and wondered where the range was and how to join. He will probably be showing up at the IPSC match later today with his application in hand.