I got a call a few days ago while I was away on vacation from Omie who is a a reporter at the local newspaper. She wanted to talk about class 3 firearms–full automatics in particular. I arranged to take her and her photographer, Geoff, to the range as soon as I got back. This morning we went off to the range with the closest thing I have to what she wanted–“An Evil Black Rifle”.

Omie had zero experience with firearms. I didn’t ask but I suspect she is doing a summer internship at the paper. She did say she was assigned the topic and that it was partially motivated by the recent courthouse shooting. Geoff’s background with firearms was essentially zero as well.

We talked a little bit about the history of NFA 34 and how infrequently legally owned full-autos are used in crimes. And what my opinion of full autos are. Basically I don’t have use for them because I can get more shots on target per unit time with a semi-auto than I can with a full auto. And the full-autos are so much more expensive to feed. But they are fun to shoot and I don’t think they should be so heavily restricted.

We talked about the 1994 “assault weapons” ban, it’s history, and the statistics related to crimes committed with those type of firearms. I told them of the definition of an “assault weapon” and that I had an example for them to shoot today.

We also talked a little about my history as a gun owner (inspired to buy my first gun by the election of Bill Clinton), as a gun rights activist, and director of Boomershoot.

After that I gave them some safety lessons and did some dry fire exercises with my STI Eagle. I didn’t want them to dry fire the rim-fire gun I was going to start them with. I then started them out with my Ruger Mark II (.22LR) from about 10 feet away. They did pretty good. I could tell Omie was a little scared. The first live round caused her to jump quite a bit. Her second shot wasn’t even on the paper. She then settled down some and did okay. Geoff did well even with his first shots.

After this we talked a little bit. Omie confessed she was afraid that if she held a gun she might do something terrible with it, like shoot herself. I told her about my fear of heights. When confronted with a situation where it is possible to jump off of a high cliff/building/whatever I feel an urge to do so. For years I thought there was something wrong with me for feeling this. I then found out it is a common manifestation of a fear of heights. I suspect the same thing happens with a lot of people about guns. She told us she has a similar fear of heights and seemed to agree that her reaction to firearms was similar.

I moved them to about 20 yards away and did some more dry exercises with the AR-15 before going live. Geoff was really nailing the 10 ring and I was actually rather impressed. Omie didn’t do quite as well and I could see her shaking some even when she wasn’t holding the gun. 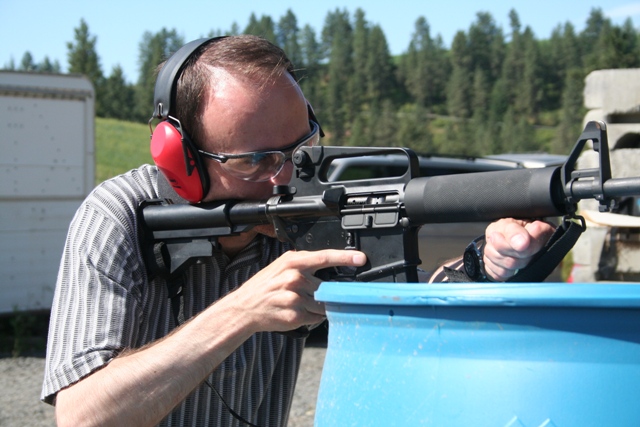 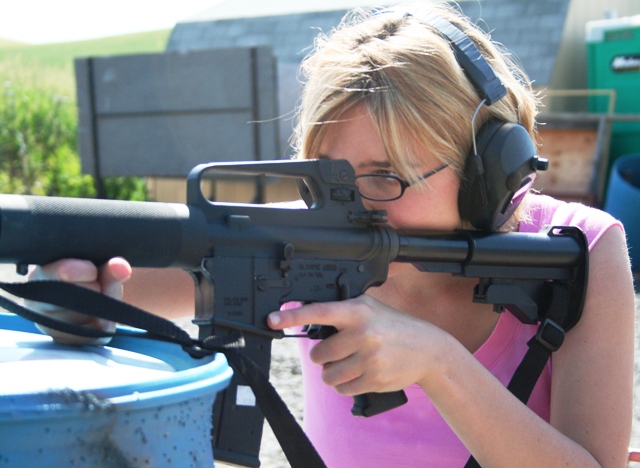 I didn’t notice until after looking at the picture above that Omie was looking over her glasses through the rear site. That could explain part of why she didn’t do quite as well as Geoff.

They then wanted pictures of me shooting so I emptied several magazines from my STI into an IPSC target and explained a little bit about “Practical Shooting”.

I think things went well. We’ll see how the article turns out.

Update: I messed up the spelling of Geoff’s name. I originally had it as Jeff. If I were to change the title now it would break the link in Sebastian’s post.

Update2: Sebastian says he’ll fix his link so I fixed the title.