Via Dale and the Lewiston Morning Tribune we have more information about the suspect in the shooting over the weekend:

Juliene Way is in a rather poor, isolated, and unkempt part of town. While in high school our daughter Kim had a friend just a block or so further east she frequently spent the night with. The friends father was in jail and her mother, in her late 30’s, was living with a 19 or 20 year old boyfriend. Then the boyfriend committed suicide and things got so messed up that Kim didn’t visit much anymore. What I’m trying to say is that some of the people in this area of town have more than their share of problems.

I find it very interesting that the FBI and ATF are involved. Some Federal law(s) must have been broken. The first thing that comes to mind is that perhaps the SKS rifle had been converted to full auto. That would explain the reports of “automatic rifle” in some of the early news reports and what the assistant Police Chief said at the news conference yesterday. It’s a little odd that Kootenai County would be involved too. Kootenai County is 90 miles north of Moscow.

Something that bugged me on the drive back to the Seattle area and as I was trying to go to sleep last night was that part of the Federal Building and Post Office were taped off by the police: 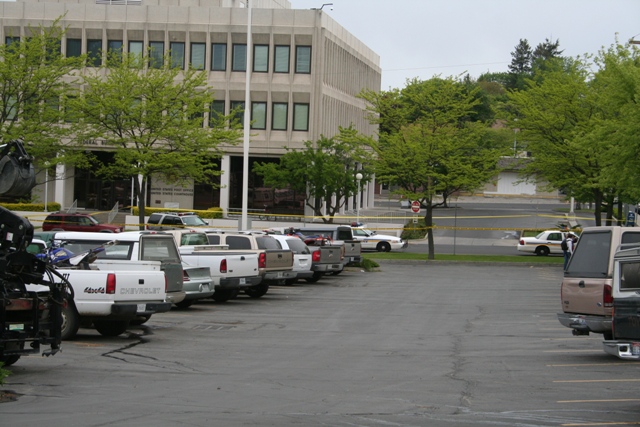 The picture above is looking north at the Post Office. The one below is looking south at the taped off area with the Post Office just out of the picture to the right. 5th and Jefferson is the intersection where the barricade is in the middle of the street. Use the two police cars parked there on 5th street for reference between the two pictures.

The Post Office/Federal Building is two blocks west of the dispatch center that was shot up. It’s out of sight, down a hill, and on the opposite side of the building from the window and door that were shot up. But looking at maps and where the police officer was killed it looks like bullets intended for him could have continued down the hill and street and connected with the Federal Building. I suppose this could also be reason enough for the Feds to get involved.

The next news conference is in 90 minutes. We’ll all learn more then.