Hope you get a good laugh out of this. According to the felons at PNNL/Battelle the picture below constitutes “adult content”. In the big picture of things this might not even be brought up later on. It’s just a minor example of the egregious nature of the pretexts they used to justify firing me. 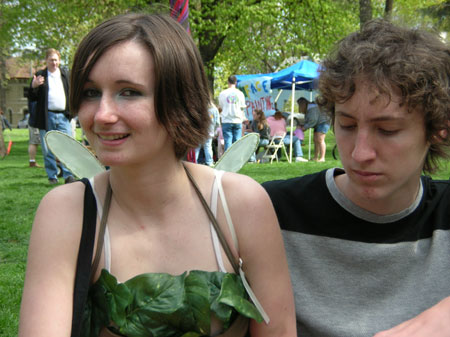 This picture was taken by my daughter Xenia at a public fair in Moscow, Idaho on April 30, 2005. I had viewed her Live Journal post believing PNNL’s “reasonable use” policy for company computers would include such material. The image was cached by the web browser and their scan of the hard disk revealed it. I wouldn’t have guessed that it would run afoul of their “adult content” policy or imagine someone would have the gall to use such a picture as a pretext to fire me. Perhaps my daughter’s friend should have been wearing a burqa.

Update: Perhaps that picture is more “interesting” than I thought. PNNL investigators viewed that picture on Xenia’s Live Journal five times. “PUCK” viewed it four times and “WD31448” (Una Carriera) viewed it once as well: