It’s a little large to put it in your pocket or hip holster but you could mount it on your starship or even your Humvee: 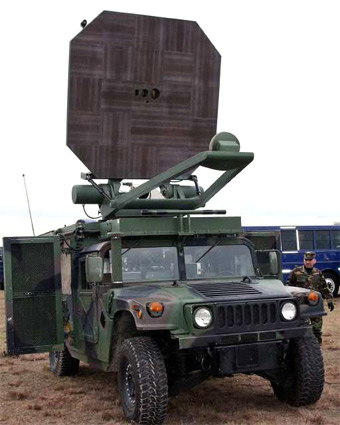 MOODY AIR FORCE BASE, GA. — The military calls its new weapon an “active denial system,” but that’s an understatement. It’s a ray gun that shoots a beam that makes people feel as if they are about to catch fire.

The technology is supposed to be harmless — a nonlethal way to get enemies to drop their weapons. Military officials say it could save the lives of civilians and service members in places such as Iraq and Afghanistan.

The weapon is not expected to go into production until at least 2010, but all branches of the military have expressed interest in it, officials said.

During the first media demonstration of the weapon Wednesday, airmen fired beams from a large dish antenna mounted atop a Humvee at people pretending to be rioters and acting out other scenarios that U.S. troops might encounter in war zones.

The device’s two-man crew located their targets through powerful lenses and fired beams from more than 500 yards away. That is nearly 17 times the range of existing nonlethal weapons, such as rubber bullets. Anyone hit by the beam immediately jumped out of its path because of the blast of heat. Though the 130-degree heat wasn’t painful, it was intense enough to make participants think their clothes were about to ignite.

The system uses electromagnetic millimeter waves, which can penetrate only 1/64 of an inch of skin, just enough to cause discomfort. By comparison, microwaves used in the common kitchen appliance penetrate several inches of flesh. The millimeter waves cannot go through walls, but they can penetrate most clothing, officials said. They refused to comment on whether the waves can go through glass.

Early in my career as an electrical engineer I worked with millimeter waves some. I’m sure it will go through most glass although it is possible to make glass it won’t penetrate. It is also trivial to make clothes that block it. That doesn’t mean it’s useless but it will cause adversaries to spend time and money to acquire and utilize the necessary protective equipment.

As it is currently shown it’s vulnerable to a well placed bullet. My advice is to armored that spot a little bit better before going to production with it. Otherwise a single agitator could disable it and enable a crowd to riot (whatever).