I’ve said it before but talking with Lyle at UltiMAK yesterday I obtained some more evidence that gun owners are in many ways treated like blacks in this country were 50 or 60 years ago. Actual lynching don’t occur. Ruby Ridge and Waco come close in many respects but no ropes and trees were involved. But what does happen is marginalization, shunning, firings (mine and I know of three other people that had similar problems), and signs such as this one (St. Louis Missouri August 13, 2006): 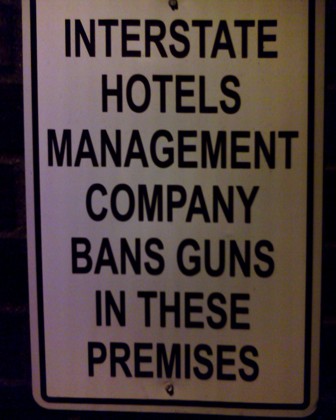 And read through this list and find how many similar restrictions apply to gun owners. A sample:

Back to what Lyle told me–One of the limiting factors to growth in his business (gun accessories) is building stuff fast enough. For over a year he has been trying to find more machine shops to build his stuff. He has had something like seven or eight companies tell him they don’t want his business because it is gun related. He has been unable to find any new suppliers in the last 18 months. Legally I support their right to refuse to do business with someone. For example I wouldn’t do business with someone making “ovens” for Nazis. And I don’t want my Modern Ballistics program sold to certain organizations opposed to basic human rights. But that so many companies have this bigoted viewpoint tells us a great deal about the attitudes of this country.

The advice I gave Lyle was, “Ask them if they have a similar policy about doing business with blacks.”