One of our employees found this gem a few years ago at the local food co-op– a place where they charge high prices for food that’s “non-corporate” and where they promote anti-capitalist politics and ideals.

It reveals much of the driving force behind the institution of Socialism– pure, unadulterated, white-hot hatred for Mankind, marketed to us as “compassion”.  This rare glimpse into the mind of a Leftist is what I call the “Hate Dollar”.

I believe I can speak with some authority in this area, having been one of “them” myself, growing up as I did among people of similar attitudes and beliefs.  Let me know if you want any part of this work explained: 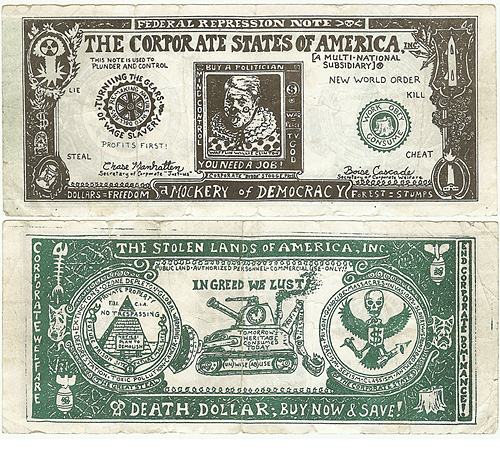 Check out the high resolution version and you’ll see the exquisite detail and the care with which the artist spills out hatred for America, for Liberty, and for most anything that smacks of human achievement and advancement.  Note also that President Clinton was far too Right Wing for them, having been something of an open-trade president.

Incidentally, I can find nothing in the hate dollar that would be at odds with what the current crop of jihadis has been saying– The overlap of the two ideologies is worthy of note.

2 thoughts on “Currency of Hatred”