I remembered as soon as I heard it, Barb and I mispronounce Missouri. It’s pronouced mi-ZER-ah by the locals here. With that small error corrected we are doing fine (other than the marginal Internet connection).

Monday was spent in Branson. In the morning we visited the Titanic museum. We were quite impressed. But why such an extensive Titanic museum in the Midwest? I could see having it in New York City, Belfast, or even London, but Branson Missouri? Never mind. We liked it a great deal.

Monday evening we had dinner at the Shogun Restaurant and were pleased with both the food and the show.

After dinner we went to the Jim Stafford Show. He and his kids are very talented musically but the humor was disappointing.

Tuesday afternoon we visited the Laura Ingalls Wilder Museum in Mansfield. I haven’t read even one of her “Little House on the Prairie” books or watched one of the T.V. shows but still enjoyed the museum. Her daughter Rose Wilder Lane was quite impressive too and a large section of the museum is devoted to her. Rose is considered seminal force behind the Libertarian party!

Late on Tuesday afternoon we found our way deep into the “hills” to the home of Ozark Pyrotechnics owner Dave and his family. The highest point in the state is 1772 feet and the lowest is 230 feet above sea level so it’s not really possible to have “hills” that qualify to our Idaho sensibilities. Dave is a self described hillbilly. If Dave and his family are representative of hillbillies then it is no insult to be called one. For hours Dave and talked about Boomershoot and his first effort at a similar event while Barb was entertained by the two girls: 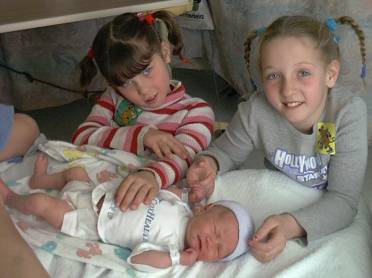 Dave, knowing we were celebrating our 30th anniversary this week fixed us a wonderful dinner, complete with champagne, and put on a fireworks show for us. This wasn’t just a few fountains, sparklers and firecrackers. This was a real fireworks show that required a call to the local sheriff and the fire marshall beforehand. Here is a picture of Dave with his idea of real fireworks (the biggest shells for us were ‘only’ four inches):

Update: I forgot to mention the fireflies! Barb and I had never seen fireflies before. We saw our first fireflies Tuesday night as we were preparing the fireworks. The dark haired girl in the picture above caught a couple and showed them to us up close.

It was such a cool way to celebrate our anniversary. Other people celebrate anniversaries by going to Hawaii or Europe. We visited hillbillies in the Ozarks and saw fireflies and our own private fireworks display. How many people can claim an experience like that?